NASHVILLE (BP) — Louis Zamperini, an Olympian who was later captured by the Japanese during World War II and whose story was told in the book “Unbroken,” died July 2 at age 97.

Zamperini’s story was originally made famous by Laura Hillenbrand, author of the 2010 “Unbroken: A World War II Story of Survival, Resilience, and Redemption.” Angelina Jolie is directing a movie based on the book that will be released in December.

After a rebellious childhood in California, Zamperini excelled at distance running and qualified for the 1936 Olympics in Berlin. He finished 8th in the 5,000-meter race as a 19-year-old and likely would have competed in the 1940 Olympics if World War II hadn’t erupted. 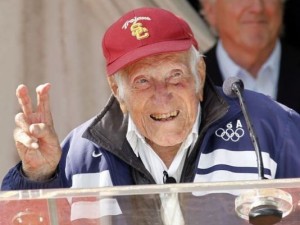 Zamperini joined the Army Air Forces during the war and was shot down over the Pacific. He survived on a life raft in the ocean for 47 days before he was rescued by the Japanese. He spent two years in Japanese prisoner of war camps where he was beaten and tortured – most cruelly by a guard nicknamed “the Bird” — before being liberated in 1945.

His life after the war was characterized by alcoholism and depression until Zamperini attended a Billy Graham crusade at the prompting of his wife Cynthia.

“I went back to the prayer room and made a confession of faith in Christ,” Zamperini said in an article published by In Touch Ministries. “While I was still on my knees, I knew my whole life had changed. I knew that I was through getting drunk — that I’d forgiven all my guards, including the Bird. I just couldn’t believe it was happening.”

Zamperini later returned to Japan and met face-to-face with some of the guards who had been his captors. He forgave them and shared the gospel with them, and some became believers in Christ.

“The most important thing in my Christian life was to know that I forgave them — not only verbally, but to see them face to face,” Zamperini said in the In Touch Ministries story. “That’s part of conversion.”

David Schroeder, director of communications for B&H Publishing, said he was especially moved by Zamperini’s forgiveness of his captors after the war ended.

“What Zamperini experienced was beyond what anyone should endure,” Schroeder wrote in a blog post. “And what did he do? He extended his hand. He forgave. Grace appeared and Jesus is revealed in his story.”