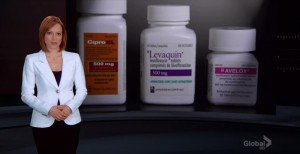 (Health Impact News)  – One third of all the drugs that doctors write prescriptions for in treating common maladies, especially infections of any kind where antibiotics are so routinely prescribed, contain a toxic ingredient that has unusual and debilitating side effects. A 2013 lawsuit prompted the FDA to issue black box warnings, but physicians are still prescribing these deadly drugs.

Fluorine or fluoride boosted well beyond limits allowed for fluoridating tap water is also fairly common in anti-depressants, anti-anxiety drugs, anti-inflammatory steroids, and even anesthetic drugs used to put patients under during surgical procedures. This article will explain why you should do your best to avoid them. Some estimate that 33 percent of pharmaceutical drugs contain fluorine.

The drug companies’ lab people consider fluorine to be a sort of selective solvent to penetrate tissue and get to whatever the drug is purportedly aiming at. But it is toxic and also penetrates the blood brain barrier while hindering the thyroid gland’s activity by replacing that gland’s main nutrient for energy, iodine.

Some have even attributed fluoridated water to the rise in cancer rates while others mention its negative neurological impact since it can easily seep into the pineal gland located in the brain.

Most Pharmaceutical Antibiotics Create Other Health Problems, Some Very Dangerous

Synthetic pharmaceutical antibiotics used often are beginning to fail as intended because pathogenic bacteria are able to develop immunity to them. Most natural antibiotics such as colloidal silver, garlic, Mediterranean oregano, and others have not been figured out by those same clever pathogens. Then there is also high dose vitamin C that does wonders for infectious diseases regardless of its source.

Here’s a short list of fluoroquinolone antibiotics that have caused considerable damage to those patients who were prescribed. The brand names are in parenthesis. Notice the suffix “floxacin” in the chemical names. Those victimized by any of the antibiotics listed use the term “floxed” to describe their condition, as in “I too have been floxed and my conditions include … .”

Here is a more extensive list of fluoroquinolone drugs.

Think of that, 3000 deaths and 2000,000 serious side effects, such as becoming disabled and in chronic pain or chronically seriously ill with multiple symptoms, as the tip of a deeper iceberg, an iceberg that includes who knows how many unreported adverse effects. All that for attempting to treat the sniffles or sore throat. These are only the reported cases.

The actual cases exceed these numbers because many adverse fluoroquinolone adverse events are not reported to the FDA or CDC. Not everyone who is adversely affected knows about sending a report to the CDC or FDA. It’s likely most flouroquinilone prescribing physicians are very rarely reporting their patients’ woes as well.

The prescribing physician usually dismisses the patient’s complaints and attributes them to diagnosing another treatable ailment. So the known reports don’t reflect the enormity of adverse consequences.

Thanks to a medical system that refuses to take responsibility for fluorquinolone damages. Floxed victims are forced into coping on their own with forum sites and Facebook pages devoted to them for information and camaraderie. Here’s one.

At least there have been mounting lawsuits against drug companies’ fluoroquinolone products, especially Leviquin and Cipro, the most commonly prescribed.

A 2013 study discovered the underlying mechanics of cellular deterioration throughout all organs, connecting tissues such as tendons, and central and peripheral nervous systems. This is why so many confusing symptoms and serious health problems are manifest among the floxed.

These antibiotics are able to penetrate into cells with damaging results. The heart of cellular energy and starting point of our biological life is located in our cells’ mitochondria, where adenosine triphosphate (ATP) is metabolically manufactured. ATP is often referred to as the “molecular unit of currency” for intracellular energy transfer.

All cells contain mitochondria, thus destroying or impairing their ability to create ATP results in rapid health deterioration. ATP is simply the carrier and regulation-storage unit of energy within the average  human body’s one hundred trillion human cells. At any instant each cell contains about one billion ATP molecules.

This extraordinary amount is sufficient for that cell’s needs for only a few minutes and must be rapidly recycled. From the 2013 study “Bactericidal Antibiotics Induce Mitochondrial Dysfunction and Oxidative Damage in Mammalian Cells”:

These data [from their study] demonstrate that bactericidal, but not bacterio-static, antibiotics impair the function of mitochondria and, consequently, the overall respiratory capacity of the cell. (Source)

By the way, all quinolones and fluoroquinolone antibiotics are bactericidal. Bacterio-static antibiotics, usually sulfa drugs, do not aggressively seek and kill pathogenic bacteria. They contain bacteria by removing their sources of nutrition and leaving them to hopefully die off.

After a 2013 lawsuit successfully demanded the FDA issue a black box warning on all fluoroquinolone antibiotics, enough physicians have been continuing to prescribe them for minor infections. Who reads black box warnings? Obviously not every client, patient, or administering physician.

This black box warning does somewhat serve the pharmaceutical companies more than uninformed patients. The list of horrendous side effects are listed on it. Those who are floxed after 2013 will not have as much ammunition for suing the manufacturer.

The latest warnings from the FDA in 2016 advise that fluoroquinolone antibiotics should not be prescribed for minor infections, according to Consumer Reports. It’s this reporter’s opinion that they should be avoided completely.

Here’s what needs to be avoided upon recognizing early signs of fluoroquinolone toxicity beyond any ailment for which it was prescribed: Fluoridated water, ibuprofen, and any other over the counter pain killers that contain acetaminophen.

These and other NSAID drugs are usually recommended along with the antibiotics. Also avoid steroidal anti-inflammatory drugs and anti-depressants. Many of them are fluoridated.

The study referenced in the previous section mentioned N-acetyl-L-cysteine (NAC), a very accessible amino-acid supplement, as an item that helped prevent or reverse mitochondrial damage from the bactericidal antibiotics.

Others have suggested high intakes of magnesium and calcium as soon as possible since those minerals bind with quinolones to create chelations that nullify the toxicity and help remove them from the body via normal elimination processes.

However, repairing the damage done is another story. A complete e-book on detoxifying and reversing damages after being floxed is available here.