Operation Desert Tortoise: It’s not over. 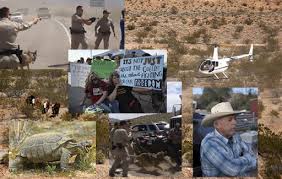 Senate Majority Leader Harry Reid told KRNV News 4 that the showdown between a Nevada rancher and the federal government is “not over.” He said, “We can’t have an American people that violate the law and then just walk away from it. So it’s not over.” WorldNetDaily reports that former Sheriff Richard Mack, executive director of the Constitutional Sheriffs and Peace Officers Association says his government sources claim that the weekend retreat of the Bureau of Land Management is more of a regrouping, and that the feds were planning an attack on rancher Cliven Bundy. Mack also said that Reid’s remarks reflected stupidity in putting the federal bureaucracy ahead of a family that has not committed a crime.

Reid’s comments reflect the problem in Washington, DC. He believes that “we can’t have an American people that violate the law.” Yet, he, his political party, his president and his Attorney General have license to break the law on a daily basis. The “Administration” refuses to enforce many laws that Congress has passed–immigration, off-shore drilling, marriage, health care–just to name a few. As Senate Majority Leader, Reid has refused to hold the Administration accountable supporting the premise that the president and his attorney general have wide discretion on enforcing the law determined by whether they feel the law is just. Therefore, Reid himself is breaking the law and violating the Constitution.

Type in “Nevada, BLM” on the White House website and a huge file appears of the FY2015 OMB Budget for the Department of Interior. Clark County, Nevada is mentioned 9 times. One of the mentions is a congressional finding that the public land in Clark County that has not been designated as wilderness is no longer managed by the Land Policy and Management Act of 1976, but “presents unique opportunities for the granting of additional rights-of-way, including for high voltage transmission facilities…” It further states that no funds may be used to permit “lands identified by the Record of Decision for Solar Energy Development in Six Southwestern States…that lie within the boundaries of the proposed Mojave Trails National Monument…”

This appears to guide the location for the Communist Chinese Solar Farm advocated by Reid and his son Rory– who represents the US domiciled Communist Chinese energy company, a major contributor to Reid–to a certain part of Clark County–perhaps the land Bundy and his family have ranched for generations. Hence, Reid has already moved legislatively to remove Bundy, the only remaining rancher in Clark County. A warning to Reid and his communists can be found in Deuteronomy 19:14: “Thou shalt not remove thy neighbor’s landmark, which they of old time have sent in thine inheritance..” Another is: Thou shalt not steal. Still another: Thou shalt not covet. Reid’s right, it’s not over. Now or in eternity.