Opinion: Chipotle Is A Victim Of Corporate Sabotage… In Retaliation For Restaurant’s Anti-GMO Menu

(NaturalNews) After observing recent events involving Chipotle and e.coli, here’s my analysis of the situation: Chipotle’s e.coli outbreaks are not random chance. They are the result of the biotech industry unleashing bioterrorism attacks against the only fast food company that has publicly denounced GMOs.

How do we know? The CDC has already admitted that some of these e.coli outbreaks involve a “rare genetic strain” of e.coli not normally seen in foods. Furthermore, we also know the track record of the biotech industry engaging in the most criminal, dirty, sleazebag tactics imaginable against any person or company that speaks out against GMOs.

Doctor Oz, for example, was maliciously targeted in a defamation campaign funded by the biotech industry earlier this year. The onslaught against Oz was initiated because he publicly expressed his support for honest GMO labeling on foods.

As the attacks escalated, Doctor Oz had his own team investigate the source of the attacks and found they were all biotech industry shills, some with felony criminal records and long histories of dubious propaganda activities targeting anti-GMO activists.

As a clean food advocate myself, I know firsthand of the malicious tactics used by these biotech mafia operations, including tactics of intimidation and terrorism, such as calling in bomb threats to locations where clean food activists are about to speak. 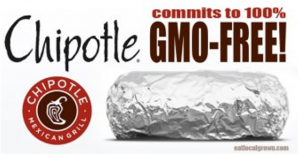 There is absolutely no question that the biotech industry will resort to ANY activity necessary to destroy food companies that oppose GMOs. And yes, this includes acts of bioterrorism against Chipotle — something that’s ridiculously easy for biotech industry operatives to carry out with simple, low-cost laboratory supplies sold online at places like Amazon.com.

I am now openly encouraging Chipotle’s management to initiate a criminal investigation with the FBI to attempt to identify the sources of this corporate sabotage campaign.

To be clear, what’s really happening at Chipotle is that biotech industry shills are deliberately contaminating Chipotle’s food with strains of e.coli in a malicious attempt to destroy both the reputation and finances of the Chipotle food chain. This act of bioterrorism is entirely consistent with the known behavior patterns of the biotech industry which, for example, engaged in illegal money laundering in Washington state in order to destroy the GMO labeling bill there.

The biotech industry not only sells deadly glyphosate herbicide poison that destroys human health (and contaminates ecosystems), it also uses its dirty money to financially influence academics, journalists and lawmakers. Those individuals who don’t fall into line with the biotech agenda are then treated to intense campaigns of defamation, slander, intimidation and threats to try to silence or discredit them.

And when that doesn’t work, biotech industry operatives will literally engage in acts of terrorism like we’re seeing right now with Chipotle. To understand the biotech industry, you have to first understand that these are truly EVIL people who have no ethical boundaries whatsoever. They will target and destroy any person, any institution or any public company that they see as standing in their way of total world domination over the seed supply (and hence the food supply). The idea that exposing the public to e.coli might be harmful to some people doesn’t cause them to hesitate for even a moment. The more people get sick or die from their Chipotle operation, the better for biotech!