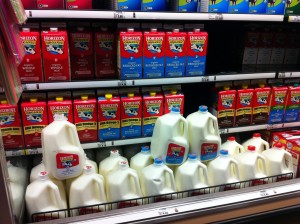 The Horizon food company sells organic milk with “DHA Omega-3 Supports Brain Health” printed on the carton. It’s marketed as nutritionally enhanced, and the company charges a higher price for this addition. It certainly sounds like a positive thing; however, few consumers are aware that a strange process is being used to infuse the milk with omega-3s.

Algae grown with corn syrup is being added to organic milk

In a South Carolina factory, five-story tall industrial vats are growing huge quantities of algae. The tanks are kept warm and the algae are fed using corn syrup. The algae is called Schizochytrium, a fast-replicating algae found growing somewhere along the coast of Southern California (the original founder won’t say where).

In the warm, carefully-tended and sugar-infused conditions, Schizochytrium multiplies very quickly. After processing, what’s left is a fishy-tasting corn oil that contains omega-3s.

Corn syrup made from corn starch is invariably made from GMO corn. Consumers buying organic are usually trying very hard to avoid these kinds of ingredients. When buying algae-infused products, they are paying up to twice as much for something that contains a toxic oil-laced product.

USDA admits it made a mistake in allowing processed algae in organic milk, yet continues to allow it

Not surprisingly, details about the process used to create these omega-3s are left off the milk carton labels. In addition to the “ick factor,” it doesn’t sound very organic. The next question is obvious: Should a milk infused with factory-produced oil made from corn syrup be labeled organic?

The USDA approved the use of algal oil and similar ingredients as an acceptable additive to organic products in 2007. Five years later, USDA officials admitted misinterpreting federal regulations. However, the organization upheld its designation, stating that they didn’t want to “disrupt” the food marketplace.

No surprise: USDA officials and spokespeople have deflected questions about the matter ever since. Receiving the U.S. Department of Agriculture’s “USDA Organic” seal allows companies to charge much higher prices than non-organic counterparts in many cases. Some companies are pushing to expand the definition of “organic” in order to boost sales and profits. Meanwhile, consumer groups advocate an even narrower, more strict definition.

Omega-3s are known for a range of health benefits including improvements to brain, heart, eye and skin health. The algal version was created as a vegan alternative to fish oil. However, organic milk produced by grass-fed cows already contains far more omega-3s than non-organic milk. There’s really no need to infuse it with a substance made in a factory.

When looking to buy the healthiest milk and dairy products, seek out items labeled organic, grass-fed, raw and local if possible. Favor the offerings of small regional farmers instead of large corporations whenever you can.