“Out of the Devil’s Cauldron”

“It’s here. Just came in the mail”, my sister hands me the package that I have been expectantly waiting for since I ordered it on ebay. I had just finished dinner and was ready for a good read. Making my way to my basement apartment I tore it open. “Out of the Devil’s Cauldron – A Journey From Darkness to Light” by John Ramirez, and it was a signed copy. I couldn’t wait. I was so excited. 4 hours and 45 minutes later I finished and was left wanting more. This book is a must read and a fast read.

I originally came across John Ramirez quite by accident while doing some research on the Internet. “Escape From Hell-Ex Satan Worshipper John Ramirez Testimony” suddenly pops up along the sidebar. “Hmmm, that looks interesting, I’ll check it out.” Fascinated I began to do research on John Ramirez looking up everything I could find on the Internet. He’s been on many major media outlets all over the United States such as TBN and CBN along with many radio interviews. 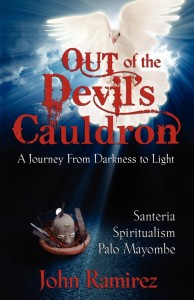 He’s got one of the most powerful testimonies I’ve ever heard. He’s a former Satanist and now he’s an evangelist for Jesus Christ. As a Satanist he never wanted to be a Christian. That was for people who were weak, feeling sorry for their selves and didn’t have anything really going in their lives. Their life was stale and paralyzed. He could bring Christians to their knees. Not to prayer, but because they had no power. It wasn’t because their God wasn’t all powerful; it was because the vessel was weak. The vessel had no prayer life, no fasting life, and no relationship with God. There was a form of godliness in the person but no power. They were out of God’s will, His promises and His divine purposes.

Officially, at the age of nine, John was introduced to the dark side of Santeria, Spiritualism and Palo Mayombe through a ceremony. He would go to demon church from 7pm to 5am being trained by witches and warlocks that knew the spiritual realm like the back of their hand. The ring of this demonic world was made up of well known singers, doctors, lawyers, principles, judges and police officers. They were all into witchcraft and more organized than the church itself. This was the life he lived for weeks on end, months on end and years on end eventually becoming the third highest ranking high priest in New York answering directly to the devil himself.

One night John was watching Jerry Springer and he heard an audible voice that he did not recognize. “Son, I’m coming soon, what are you going to do with your life?” After that he saw a vision that the sky was on fire and there were people running underneath, but there was nowhere to hide. That night God caused him to fall into a deep sleep. He found himself on a packed subway train heading straight for hell. When the doors opened it was hot and he was looking for a way out of the tunnel.

Suddenly, the devil himself stood in front of him. “I have given you everything: wealth, women and power. People fear you because of me. I was like a father to you, and now you want to throw it all away? Don’t you know you can never get rid of me?” (John had recently visited a church with a Christian girl he was dating). “If you won’t serve me then I’ll have to destroy you.” As Satan tried to grab him a 3 foot cross appeared in John’s hand rendering the devil powerless. This happened twice and suddenly he woke up. In a dream God had showed him that He loved him and that He was more powerful than anything he had done in his 25 years of witchcraft. John got out of bed and bent his knee to Jesus Christ. Amazing!

This book is available at bookstores nationwide or at Amazon.com. To order John’s book or invite him to speak at your church contact johnramirezministries@yahoo.com You can learn more by visiting  www.JohnRamirez.org or writing to John Ramirez Ministries PO Box 286537 New York, NY 10128 or call 917-587-1127.

Charlene M. Ryerson can be contacted at paradisepraiseinternational@gmail.com