Over the last decade in the United States, the deaths of over 100 children — at the very least — have been linked to receiving a measles vaccine, compared with zero children dying from the disease itself, according to the U.S. government’s own compiled data. Put another way, an American child would have been infinitely more likely to die after receiving a measles shot, percentage-wise, than from getting the actual measles disease in the last ten years. Thousands more have suffered from adverse reactions to the measles shot and other vaccines. The explosive numbers have massive implications for public health efforts, analysts said.

Of course, the establishment media entirely failed to report those figures as it hysterically demonized “anti-vaxxer” parents — at least until the facts went viral in the alternative press. USA Today even published an especially unhinged screed encouraging the jailing of parents who refuse to vaccinate their children, though it was not clear whether the Amish and other religious communities would be included in the proposed mass-roundups. Now, elements of the increasingly discredited and wildly mischaracterized “mainstream” media are engaged in a ham-handed damage-control effort.

While all of the data is publicly available online through the federal government, it appears that the first outlet to put the information together in one report was Health Impact News. Its article promptly went viral and sparked a cascade of follow-up stories in the alternative media. HealthImpactNews.com editor Brian Shilhavy first highlighted data from the U.S. Centers for Disease Control and Prevention (CDC) showing that there have been no child measles deaths since 2003 in the United States.

Next, Shilhavy used a HealthSentinel.com graph (shown below) based on a variety of U.S. statistics to show measles mortality rates in America going back to 1900. Until about the 1920s, more than 10 per 100,000 were dying from the disease. However, by 1955, with advances in medicine and huge progress in sanitation, nutrition, and living standards, those rates steadily declined from 1900 levels by almost 98 percent to a mere 0.03 deaths per 100,000. The vaccine was introduced in 1963, and by then, measles was almost a non-problem in the developed world.

Then Shilhavy detailed the results of his search through the CDC’s “Vaccine Adverse Event Reporting System” (VAERS). “The search result contained 108 deaths over this period, resulting from four different measles vaccines sold in the United States during the past 10 years,” he wrote. “This database reflects only deaths that were reported during the time frame, and therefore probably reflects a much lower number than actual deaths, since most doctors and health authorities believe vaccines are safe, and would not normally attribute a death to a vaccine and actually report it.”

As the facts were going viral, the largely discredited Snopes.com website labeled the facts as “false.” However, in its half-baked effort to supposedly expose the data as “false,” the radically pro-government website mostly attacked straw men while relying on data from Third World countries with widespread malnutrition and a lack of even basic healthcare services.

Meanwhile, Newsweek, still attempting to recover after the unprofitable and Big Pharma advertisement-supported magazine was sold for $1 dollar in recent years, also piled on. In an error-riddled propaganda piece, the embattled online outlet notes that “it’s true some people may have died as a result of the measles vaccine.” But it goes on to claim, citing Third World statistics from the United Nations’ “dictators club” that are not applicable in the United States, that “many more would have died without them.” 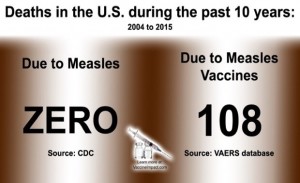 Unsurprisingly, the CDC claims its vaccination program “eliminated” measles in 2000. “The United States was able to eliminate measles because it has a highly effective measles vaccine, a strong vaccination program that achieves high vaccine coverage in children and a strong public health system for detecting and responding to measles cases and outbreaks,” the CDC argued.

However, as the graph above shows clearly, measles was virtually a non-issue in the United States years before the vaccine for it was introduced in 1963. In fact, as more than a few doctors and experts have pointed out, fully vaccinated people continue to get and spread measles, as has been proven in countless official studies and in the peer-reviewed literature. A recent measles outbreak in New York, for example, was last year traced to a fully vaccinated person. Some patients even get measles from the shot!

The U.S. government’s Vaccine Adverse Event Reporting System (VAERS), meanwhile, does caution that its reports of adverse reactions do not necessarily establish a cause-and-effect relationship. As numerous analysts including Shilhavy with Health Impact News pointed out, though, in reality, the system almost certainly underestimates the true count. This is primarily because unsuspecting parents and doctors — convinced that vaccines are entirely safe — would be unlikely to link the vaccine with the sudden death of their child, even though the package inserts clearly warn of possible death or serious injury as potential side effects.

While those who rely on the establishment press for information might not know it, countless medical professionals have spoken out about the issue for decades. “After frightening you with the unlikely possibility of measles encephalitis, your doctor can rarely be counted on to tell you of the dangers associated with the vaccine he uses to prevent it,” explained the late Dr. Robert Mendelsohn in a paper e-mailed out as part of a health newsletter. “The measles vaccine is associated with encephalopathy and with a series of other complications such as SSPE (subacute sclerosing panencephalitis), which causes hardening of the brain and is invariably fatal.”

“Other neurologic and sometimes fatal conditions associated with the measles vaccine include ataxia (inability to coordinate muscle movements), mental retardation, aseptic meningitis, seizure disorders, and hemiparesis (paralysis affecting one side of the body),” Dr. Mendelsohn continued after explaining that, in the developed world especially, measles is hardly a deadly plague requiring national paranoia and vaccination at gun point. “Secondary complications associated with the vaccine may be even more frightening. They include encephalitis, juvenile-onset diabetes, Reye’s syndrome, and multiple sclerosis.”

“I would consider the risks associated with measles vaccination unacceptable even if there were convincing evidence that the vaccine works,” the late prominent medical doctor concluded. “There isn’t.” More recently, numerous high-profile doctors and experts have made similar statements, despite the overwhelming pressure and threats from government and Big Pharma to remain silent on the risks. 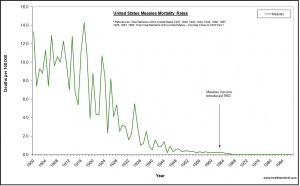 Indeed, unlike virtually any other product or industry in the United States, the federal government protects vaccine manufacturers from liability when vaccines kill or injure patients. This forces victims of vaccine-related injuries — or the families of those whose deaths are linked to vaccines — to rely on the dubious federal VICP to receive compensation from taxpayers, rather than the companies that produced and sold the potentially dangerous product.

The National Vaccine Information Center, which encourages education and opposes government mandates on the issue, highlighted a number of other statistics that again have been glossed over by the establishment press. “As of January 5, 2015, there had been 946 claims filed in the federal Vaccine Injury Compensation Program (VICP) for injuries and deaths following MMR vaccination, including 57 deaths and 889 serious injuries,” the Center reported.

“Using the MedAlerts search engine, as of December 14, 2014 there had been 6,962 serious adverse events reported to the Vaccine Adverse Events Reporting System (VAERS) in connection with measles-containing vaccines since 1990,” the NIVC continued. “Over half of those serious measles vaccine-related adverse events occurring in children three years old and under. Of these measles-vaccine related adverse event reports to VAERS, 329 were deaths, with over half of the deaths occurring in children under three years of age.”

As the NIVC also pointed out, the vaccine does not necessarily protect a person from measles, contrary to the false narrative pushed by misleading establishment press articles and bureaucrats. “Evidence has been published in the medical literature that vaccinated persons can get measles because either the measles vaccine fails to provide temporary vaccine-acquired immunity or the vaccine’s effectiveness wanes over time,” it reported. Especially problematic: Vaccines may provide temporary protection but wear off, leaving adults vulnerable to measles at a later stage in life, when the disease can be far more harmful.

Despite establishment media efforts to manufacture unwarranted hysteria and demands for “medicine at gun point,” studies and experts suggest that the approach may backfire in a major way. For one, parents who never even realized that medical professionals and studies have found vaccines to be far less than totally safe and effective become aware of the controversy.

Plus, with trust in government at historic lows, any PR efforts by politicians, lobbyists, and bureaucrats are almost assured to generate a backlash and fresh suspicions. That is unquestionably a positive development — especially when it comes to vaccines. Parents and patients should have all available information prior to giving consent and making important medical decisions in consultation with their doctors.