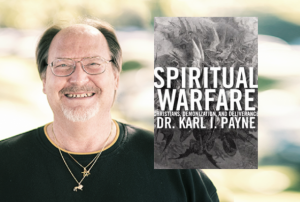 The Roman Catholic Church is publishing prayers to combat the “powers of darkness” as interest continues to grow in the rite of exorcism. Demons and supernatural forces have become a staple of popular culture, and churches are scrambling to keep up as the imagery of evil continues to flood pop culture.

An expert on combating the demonic, Pastor Karl Payne, former chaplain of the NFL’s Seattle Seahawks, told WND the “message about a Christian’s battle with the world, the flesh and the devil is just as real and relevant today as it was when God originally addressed the subject through the men He inspired to pen the Scripture.”

“The reality of demonic warfare in particular has more to do with the delegated authority God has given every true Christian over all of the powers of the enemy than cultural particulars, ethnicity, gender, education or theological training,” he said. “The reality of this enemy, this battle and the delegated authority God has given to Christians over Satan and his minions has not changed.”

Payne said the battle “will continue until the Lord Jesus Christ vanquishes all of His enemies.”

“I believe according to 1 Timothy 4 that the closer we get to the return of the Lord Jesus Christ, the more intense this battle is going to become,” he said. “If this is the case, it means that unless Christians want to live like victims rather than victors, they had better do their homework and be willing and able to stand against the powers of darkness rather than ridicule or run from them.”

Payne has been a critic of how pop culture increasingly treats the demonic as something glamorous or appropriate for children.

“The growing fascination North Americans and Europeans seem to have with horror movies, spiritism, supernaturalism, the occult and Satanism is softening up the senses and consciences of the people watching and involving themselves in this nonsense,” he said. “It’s helping prepare them to function as predators or prey when Satan begins his ultimate reign over planet earth through his coming Antichrist and false prophet.

“When two fighters get into the ring, with one thinking the fight is a staged game and the other understanding it is for life or death, the fighter who takes the fight more seriously is generally the fighter who is going to win the fight. Too many Christians seem to think demonic warfare is a game to turn on or off at their convenience, and they are getting their behinds kicked in battles they should be winning rather than losing.

“With the media and public square vilifying the Judeo-Christian faith, and conservative Christianity in particular, people are going to put their faith in something or someone. But unfortunately, it just will not be the Lord Jesus Christ. Satan is alive and well, and he is prowling around like a hungry lion, looking for those he can devour. Christians need to wake up.”

The Roman Catholic Church is the organization most strongly associated with exorcism, an image strengthened by its central presence in movies such as “The Exorcist.” But Payne says it is a common misperception to believe special titles or denominational credentials are required to fight what the church calls the “powers of darkness.”

“I am glad for anyone who knows what they are talking about to stand up against demonic warfare rather than run from it, regardless of their titles or labels,” he said of Catholic exorcism efforts. “I still care more about what is actually in a bottle than the label that is on the bottle.

‘However, as long as demons legitimately hold ‘ground,’ Ephesians 4:27, against a person, they will not leave that person until the sin that opened the door for their involvement has been personally confessed and forgiven by God, and the ‘ground’ they hold against that person has been canceled by God. Demons do not fear pastors, priests, people or their denominational titles. They fear the Lord Jesus Christ and those who understand their delegated authority over the powers of darkness.”

Instead of focusing on dogmatic rituals or sensationalism, Payne hopes his book and its new audiobook edition will force American Christians to wake up to the existence of the demonic real and rejoice in the knowledge believers have the power.

“Too much of the church today represents two sides of the same coin,” he said. “On one side of the coin are people who like to talk about demonic warfare, but do not know how to stand against it in an effective manner. On the other side of the coin are people who ridicule or run from demonic warfare. They seem to think that in redefining demonic warfare they can eliminate the reality of the battle. This is naïve. Again, fighters who prepare for battle generally fare better than those who think it is all a game. Sloganeering is not helpful or effective in confronting demonic spirits who are tormenting Christians. Talking about a battle or playing video games simulating fighting in battles does not win actual battles.”

Payne said he wrote Spiritual Warfare “as a transferable guide to help Christians learn how to biblically recognize and respond to demonic warfare.”

“We should win more battles than we lose, and serve the Lord Jesus Christ with the confidence of a victor empowered by Him rather than playing the role of a passive, helpless victim. We are victors, not victims because of the accomplished work and delegated authority of the Lord Jesus Christ. If my book helps in equipping the saints to fight rather than run, then I will rejoice.”