Partners In Crime: The Rockefeller, CFR, CIA and Castro Connection to the Kennedy Assassination 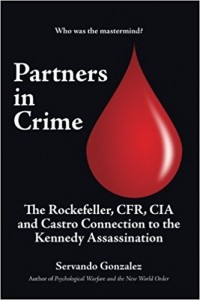 Most books about the assassination of President Kennedy written by “serious” authors and published by “prestigious” publishing houses fully agree with the Warren Commission’s conclusions that Lee Harvey Oswald was a mentally disturbed individual who acted alone and there was no conspiracy surrounding him. Nonetheless, the few who blame the CIA, usually lefties and “progressives,” never mention the key role played by important Council on Foreign Relations’ members both in the assassination and the cover-up.

They also purposely ignore Castro’s role in the event, despite the fact that he was the only one among the suspects who publicly threatened the Kennedy brothers with assassination and had a long personal history of violence and a strong inclination to commit such a crime. Moreover, none of these books adds to the list of suspects the man who created the CFR, the CIA and Castro: David Rockefeller.

As you will see in Partners in Crime, however, everything indicates that David Rockefeller was the evil mind who manipulated behind the shadows the forces that participated in the JFK assassination and its cover-up. This book is important if one wants to know why so many key people in both the Republican and Democratic parties as well as in the mainstream media hate President Trump so much and are openly talking about removing him from office.

Actually, one cannot fully understand what is really going on in America today without knowing who was the mastermind behind the JFK assassination and why he did it, because the same forces that killed President Kennedy are still working hard to overthrow President Trump and carry out their plan to destroy America as we know it.