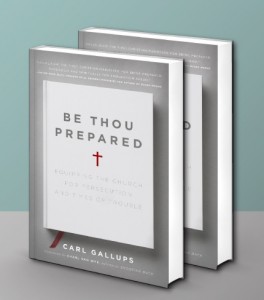 ‘I can see happening’ what Scriptures say must happen

War, genocide and chaos are constants throughout human history. Millions of Christians over the centuries have believed, wrongly, they are living in the end times. So why should Christians think today is any different?

Pastor and author Carl Gallups addressed this challenge in a recent appearance on the television program “Jewish Voice with Jonathan Bernis.” Gallups argued those walking the Earth today are in a truly unprecedented period of human history.

“We are the only and the first generation in global history, in 2,000 years, to see the return of Israel to the land,” Gallups said “That’s a 2,500, 2,600-year-old prophecy. An end times prophecy, a last days prophecy. I’m not a date-setter. I’m not an alarmist. I’m a teacher and preacher of the Word, and I’m a student of history and a student of current events. And I can see what the Scriptures say must happen, and I can see what’s happening.”

The author of “Be Thou Prepared” and other books said several unprecedented occurrences should make the church stand up and take notice.

Second, Gallups said: “Jerusalem is back in the hands of a returned Israel. We’re the first generation to see those two things. The only generation.”

Third, Gallups argued: “We’re the only generation to see the Ezekiel 38 alignment of nations taking place before our eyes. My goodness, Russia and China are in the Middle East, putting their militaries together, on the Euphrates River. ISIS has broken out. Iran, Persia, is making compacts and alignments with Russia. Turkey has become Islamized. These are all prophecies, either very direct in the Scriptures or indirect.”

Host Jonathan Bernis concurred with Gallups’ analysi, marveling at how so many Christians seem complacent in spite of everything happening in the Middle East. He compared the attitude of contemporary Christians to that of a frog placed in a pot of water that is gradually heated. “When you look at the way everything aligns, it’s so obvious and yet it’s been so gradual in some ways, and now the water’s beginning to boil,” said Bernis.

Gallups warned Christians not to have a closed-minded view of the prophecy, warning such blindness is what doomed the Pharisees.

“These were the people who were the teachers of Israel, the handlers of the Word, they were the handlers of the prophecies,” the pastor explained. “And yet, in the name of God, in the city of God, just outside of the Temple of God, they nailed the Son of God to a cross and proclaimed they were doing God a favor. They had a boxed in view of eschatology and said: ‘This is how God has to do it, this is what Messiah will look like, this is what we believe and you don’t fit it. Therefore, you are a heretic and we’re going to do God a favor and be rid of you.’ And they missed it entirely! And that’s why I’m saying to the church in America, ‘Please let’s don’t do this.'”

As Gallups observed, in the Bible, life went on as normal for most people right up until the moment of the Great Flood. The temptation, said the pastor, is to believe nothing has really changed.

Gallups calls the gradual convergence of signs and events in alignment with prophecy the “progressive revelation principle.” He told Bernis that Christians should look beyond the borders of the United States and carefully observe how closely international events are aligning with prophecy.

“The Scriptures, especially end times prophecies, are to be interpreted Middle Eastern first,” said Gallups. “In America we think everything needs to be centered on what’s happening in America. What’s happening in America is Starbucks is opening and there’s an NFL football game on TV, so all is right with the world. But that’s wrong! All is not right with the world. We look at the Middle East; Christianity is being exterminated. Entire Christian communities, and towns and cities. Eliminated.”

However, Gallups argued American Christians may not be isolated from persecution and danger for much longer. He sees the opening stages of Christian persecution in Europe and the United States. And he warns God has never promised Western Christians an easy life.

“We’ve been steeped in peace and prosperity,” said Gallups. “We kind of came to this entitlement mentality, this feeling of we are entitled to the way things are. And I think people think it’s going to be this way forever. And I don’t see that in the Scriptures. I’m not a gloom and doom prophet, or Chicken Little here. But we’re living in prophetic times, so let’s just prepare for that, mentally and spiritually, physically and tangibly.”

Gallups’ book “Be Thou Prepared” is a practical guide for both Christian families and congregations to prepare for persecution, natural disasters and economic instability. But Gallups argues many Christians are misinterpreting what it means to be prepared for trouble. It’s not just about survival, he told Bernis. It’s about ministry.

“Let’s prepare not to go hide in the woods under a log somewhere, but let’s prepare so that when disaster or tough times come, we minister to the love of Christ around us,” Gallups said.

“After all, that’s what the first century church had to do,” he concluded.