Pastors Call Out NFL for a Personal Foul in Threatening Texas 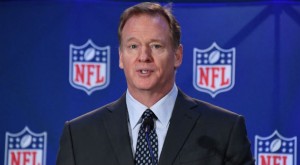 HOUSTON – Texas Pastor Council (TXPC), the coalition of pastors that includes those who led the defeat of Houston’s “Equal Rights Ordinance” known also as the “Bathroom Bill”, has issued a response to the report that the National Football League is now warning Texas against proposed legislation to keep boys out of girls restrooms.  SB 6, sponsored by Senator Lois Kohlkorst and heavily supported by Lt. Governor Dan Patrick, would establish a statewide uniform standard in all state and local government buildings – including schools – that boys, girls, men and women must use the restroom, shower or locker room of the sex identified on their birth certificate.

“Yellow penalty flags are flying all across Texas with pastors ruling a personal foul against NFL Commissioner Roger Goodell and spokesman Brian McCarthy for threatening the safety of our women and children in Texas,” declared TXPC in its statement.  McCarthy reportedly sent an email to the Houston Chronicle in which he warned Texans that, “If a proposal that is discriminatory or inconsistent with our values were to become law (in Texas), that would certainly be a factor considered when thinking about awarding future events…The NFL embraces inclusiveness…We want all fans to feel welcomed at our events, and NFL policies prohibit discrimination based on age, gender, race, religion, sexual orientation, or any other improper standard.”[i]

TXPC also said that the veiled threat ignores both the recent success of the Super Bowl in Houston and, more importantly, the privacy, safety, decency and freedom for all Texas women and children.  “We demand to know what role the NFL has in dictating the values of Texas, interfering with something outside of regulating their own sport and placing our women and children in harms way to give preference to one tenth of one percent who are confused about their gender.”  The pastors continued by asserting that, “If the NFL’s values include requiring that men can use women’s restrooms, we have a special message for the Commissioner and Mr. McCarthy; Pastors of every color and every corner of this state are declaring that we choose mothers over money, daughters over dollars and privacy over predators.”

The racially and denominationally diverse coalition representing pastors in cities around Texas from El Paso to Beaumont concluded the statement by making it clear that, “Texans love football, but we love our God, our freedom and our families more.  If we are forced to choose, then we will say to the NFL and other sports organizations or lobby groups; ‘Don’t let the ticket gate hit you on the way out of Texas.'”