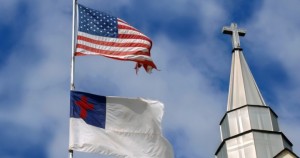 1828 Webster’s Dictionary: IDOL- An image, form or representation, usually of a man or animal, consecrated as an object of worship; anything on which we set our affection.

IDOLATRY – The worship of idols, images, or anything made by hands, or which is not God. Excessive attachment or veneration for anything, or that which borders on adoration.

Definition by the Author – To put your trust or confidence on, or in, any man or manmade object to keep you safe, protect your life, your property, or your rights. Jer. 17:5/Ps. 118:8-9

For many years I have been hearing from countless numbers of people that call themselves patriots, including some ministers, of how America must return to the contract called the Constitution and Bill of Rights. As if that is all that we need to do to save our nation and secure our children’s future. Why do we not consider the fact that this “contract” was in full force for a brief period of time and then began to be eroded and undermined by wicked men and allowed by an ignorant people? Hosea 4:6 Why and how did we “lose” it? Shouldn’t we research this question before we endeavor to restore it?

Thomas Jefferson said, “If a nation expects to be ignorant and free, in a state of civilization, it expects what never was and never will be.” He also said that “The tree of liberty must be refreshed from time to time with the blood of patriots and tyrants. It is its natural manure.” But when the people are too ignorant to recognize a tyrant there is no hope! We have traded liberty and freedom for convenience, prosperity, love of “physical” living and security.

Ben Franklin said, “They that can give up essential liberty to obtain a little temporary safety deserve neither liberty nor safety.” He also said, “Only a virtuous people are capable of freedom. As nations become corrupt and vicious, they have more need of masters.” Prov. 28:2

John Adams said “Our Constitution was made only for a moral and religious people. It is wholly inadequate to the government of any other.”

Patrick Henry said, “It cannot be emphasized too often or too strongly that this great nation was founded, not by religionists, but by Christians, not on religions, but on the gospel of Jesus Christ.”

Surely by now the reader will see the point of this article. The Flag, the Constitution, the Bill of Rights and all of “Humpty dumpty’s” men cannot make us whole again! Unless we as individuals repent of all of our evil, we and America are damned! Both sins of commission (directly sinning) and omission (allowing sin into our midst) is and will continue to destroy the nations and our children. Hosea 4:6b.

Edward Burke said, “All that is necessary for evil men to triumph is for good men to do nothing.”

Psalms 33:12: Blessed is the nation whose God is the Lord; and the people whom he hath chosen for his own inheritance.

Psalms 127:1: Except the Lord build the house, they labour in vain that build it: except the Lord keep the city, the watchman waketh but in vain.

Enough said! Now the choice is ours as individuals to choose you this day whom you will serve! Joshua 24:15