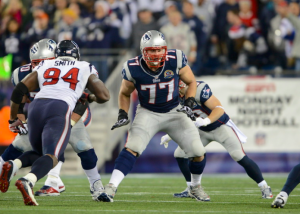 The New England Patriots recently played in their seventh straight AFC Championship Game, this time against the Jacksonville Jaguars.

One player that has been an integral part in the Patriots recent success is left tackle Nate Solder. The two-time Super Bowl champion has been protecting Tom Brady’s blindside since he was drafted in the first round by the Patriots in 2011.

“I love the guy,” Brady said of Solder. “As great as he is as a player, he’s a better person, a better human being. He’s a loving father and a loving husband. He’s a very quiet, humble person who wants to do a great job every day. He means a lot to me and this team.”

Off the field, Solder has dealt with several difficult obstacles that has tested him harder than any defensive end could.

In 2014, he was diagnosed with testicular cancer. The news was even more difficult as Solder was about to be married to his wife, Lexi, three weeks after his initial diagnosis. Fortunately, the cancer didn’t spread and doctors were able to remove the cancerous testicle.

But cancer would once again knock at Solder’s front door. In October 2015, Nate’s son Hudson, was diagnosed with Wilms’ tumor, a rare kidney cancer that affects only about 25 infants per year in the United States. Hudson was just three months old when his cancer was discovered.

As Nate and Lexi rushed Hudson to the hospital, fear and uncertainty struck their hearts. “It was heart-wrenching, because at three months old he had no idea the dangers he was in for,” Nate said to Billy Graham.org. “We didn’t know either, but I felt responsible, and I felt guilty that I was bringing Hudson a lot of trouble that he just didn’t deserve.”

But help was on the way. The Solder’s received a helping hand from Lexi’s parents who were able to organize the various medications for Hudson. Most importantly, the Solder’s relied heavily on their faith in Christ to help them sort through the pain.

“I don’t think we would be going through this the way we have been without our faith,” Lexi said to Sports Illustrated. “God has a plan, and his purpose and timing is perfect. I believe it is all working out for good and I truly believe that Hudson’s suffering and his pain is for good.”

“We know how much we’re struggling, but people see the way God is carrying us through, the joy that it brings knowing we have an eternal destiny that’s far beyond what’s here on earth,” Nate said. “We know we’re not alone in our suffering, and that our suffering is for a reason.

“These are the kinds of things that bring us joy, and I think those are the things that people are seeing through us. I don’t know where all the [people’s] beliefs are on our team, but I know that people can recognize that when they see it.”

When Solder takes the field, many will see it as a chance for him play in his fourth Super Bowl. But no matter what happens in the game, Solder’s eyes are set for more than football glory.

“I just know how frail everything is, how easily it can be taken away and how fortunate we are to be out here every single day,” Solder said. “But I have my priorities set, and my top priority is God and then my family. When those things are squared away, everything else falls into line. My faith in the Lord is so much bigger than anything we’re doing here, so much bigger than the Super Bowl.”