(NaturalHealth365) Today, smartphones are everywhere – even our children use wireless technology. Yet, most caring parents don’t seem to be worried about the dangers of cell phones. Unfortunately, new studies are definitively linking cell phone radiation to health issues in children and the unborn babies carried by pregnant women.

A pediatric conference held at the Baltimore Convention Center provided a forum for health experts to discuss the findings. Yale and Harvard scientists and doctors were particularly vocal about potentially harmful cell phone radiation to the brain development of unborn children. A correlation was found between cell phone use during pregnancy and behavioral problems manifesting in the children as they develop. 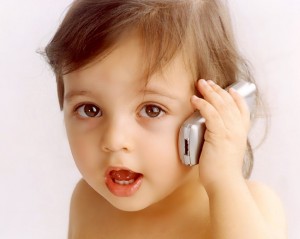 Research from the International Agency for Research on Cancer showed that pregnant mice exposed to cell phones regularly had babies that tended to have memory issues and hyperactivity. Dr. Martha Herbert of Massachusetts General Hospital and Harvard University found links between autism and the electromagnetic field of wireless internet. Wireless was found to disturb the brain’s calcium signaling and information flow, causing children to become agitated.

Cell phone radiation exposure has been linked to many types of cancer, including breast and brain cancer.  A U.S. National Toxicology Program study found a strong correlation between cell phone use and brain and heart tumors.  In fact, children’s brains absorb up to 10 times as much cell phone radiation from wireless technology as adults due to their thinner craniums, putting them at higher risk for impairment and brain cancer.

The younger the child, the higher the risk

The average adult checks their cell phone dozens of times a day, in some cases over 100 times. The brains of infants and young children are extremely vulnerable to cell phone radiation, whether from in the womb or near the parent checking their phone.

Therefore, it is crucial for pregnant women to keep their cell phones away from their bellies, especially near the end of their term. Ideally, a hands-free device should be used, with the phone kept as far away as possible. Young children should also be limited in terms of their use of cell phones, tablets and any other devices linked with wireless technology.

Much about the long-term use of cell phones is unknown, since they have only been in wide use for a couple of decades. However, studies have connected high use with negative effects on the ability to focus, which can lead to behavioral problems.

The CTIA, which represents the U.S. wireless communications industry, cites an FDA statement claiming there’s “not enough evidence” to show wireless technology and devices can cause health risks. Clearly, this is false.

We should all take steps to minimize our exposure to wireless internet and cell phone radiation, but the youngest among us require and deserve special protections.