With the influx of approximately 400,000 illegal migrants residing within the city of Paris and its surrounding suburbs, sooner or later the installation of public open-air urinals was bound-to-happen to this once magnificent “City of Lights.”

Street urinals are the latest attempt by the city of Paris in combating what has become a public health crisis in the French capital, which coincidently began with the rise of the refugee population, which of course French officials are reluctant to admit, as perhaps being a major source to the on-going problem.

City residents complain regarding the “immodest” sight of seeing bright red urinals, dotting street corners within the iconic backdrop of the Eiffel Tower. 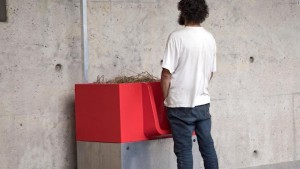 Reuters reported; “The urinals’ conspicuous placement near popular tourist spots, like the Seine River on the Ile Saint-Louis near the Notre Dame Cathedral, has prompted locals to write to town hall in protest.”

“There’s no need to put something so immodest and ugly in such a historic spot,” Paola Pellizzari, told the outlet. She said it’s next to the townhouse where 19th-century French poet Baudelaire lived and was concerned that it was too close to a primary school.”

Local mayor Ariel Weil, of course, defended the policy of turning this once wondrous city into an outhouse, calling these filthy receptacles an “invention of genius.” Saying, “If we don’t do anything, then men are just going to pee in the streets,” Weil told Reuters. “If it is really bothering people, we will find another location.”

Note the mayor’s solution, finding another location, rather than actually confronting the issue, of disgusting individuals simply relieving themselves in public. Moreover, those bright portable red “open-air” urinals apparently come without a basin to wash your hands after you take a pee.

The designer of the “Uritrottoir” a combination of the French words for urinal and pavement said it offered an “eco solution to public peeing.” This thing is simply a box with an opening in front, where an individual simply relieves himself by urinating onto a bed of straw within the box, which eventually transforms into compost for “parks and gardens.” Oh yes, the box is beautifully designed with a floral display on top, quite primitive to be sure.

One can only imagine with no sanitary conditions contained within these street urinals, the stench must be unbearable, especially during the summer months.

“It’s horrible,” said the 50-year-old owner of a nearby art gallery, who declined to give his name. “We’re told we have to accept this, but this is absolutely unacceptable. It’s destroying the legacy of the island. Can’t people behave?”

Mayor Ariel Weil is the person responsible for keeping Paris safe and lawful. No doubt public peeing in the streets of Paris is an unlawful act. However if the mayor refuses to follow the law, he should be replaced.

New York City also had an issue in the late 80’s regarding the growing homeless population, living in the streets of the “Big Apple.” However in 1993 Rudy Giuliani running for mayor focused on “quality-of-life” issues, those little things that define a cities well-being, aggressive panhandling, public drunkenness and lewd behavior within a public place were all targeted by Mayor Giuliani, and within 5-years New York City became once again a viable tourist attraction, and one of the safest “big cities” in the country.

No doubt the “City of Lights” has been transformed into a “third-world” medieval environment with the influx of over 400,000 migrants. Where urinating in the street or an outdoor box is now the norm. Eventually a civil society is judged on how its leaders handle domestic issues. Paris is slowly regressing back into the dark-ages, simply because of political correctness and gutless politicians who refuse to confront the issue of unrestricted immigration.