LANSDALE, Pa. — The mayor of Lansdale, Pennsylvania has agreed to issue a proclamation marking every Feb. 2 as “Inclusion Day” in commemoration of a recent “Drag Queen Story Fun Time” featuring the drag queen “Annie Christ”—a play-on-words of “anti-Christ.” The event generated both support and protest.

Mayor Garry Herbert’s decision is reportedly in response to a petition launched by event supporters urging him to call the day “Annie’s Day” in honor of “Annie Christ.”

“I was approached with a petition from community members asking to commemorate the day where Lansdale showed its dedication to inclusion and diversity,” Herbert told North Penn Now. “After speaking with staff, we agreed to declare Feb. 2 as ‘Inclusion Day in Lansdale,’ where we will celebrate our diversity and our commitment to that cause.”

As previously reported, Eric Torres of Philadelphia chose the name “Annie Christ” for his stage name out of his “love of gothic themes, horror movies, and bands such as NIN.” His Instagram page features a mix of photos from his everyday life as Eric—such as his interest in mudding—and his alter persona as a drag performer—some of which are gory, some with grandiose wigs and makeup, and one where Torres painted an upside down cross on his forehead.

One video posted to YouTube shows “Annie Christ” performing to the song “You Can Touch My [Breasts],” with men in attendance reaching out and doing so.

Earlier this month, he read the books “Naked Mole Rat Gets Dressed” and “Sparkle Boy” to children during “Drag Queen Story Fun Time,” an event that he himself had scheduled at the Lansdale Public Library.

Library director Tom Meyer noted that there had been calls of complaint prior to the story time, but ultimately decided to allow the event to proceed as “a lot of the parents are interested in … the message of the story time about acceptance and inclusion.” He also pointed to the library’s policies, which allow the meeting room to be used by the public.

“Some people ask me, ‘Why don’t you have a Bible story time?’ We’ve done that. There just was no protest and no big deal about it. We’re here for the whole community,” he told CBS Philadelphia. 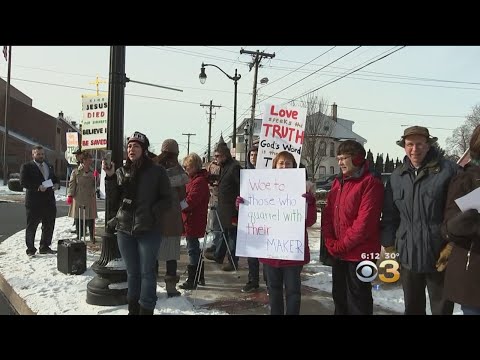 The “Drag Queen Story Fun Time” generated both protest and counter-protest, with some praying, singing, preaching or holding signs such as “Love speaks the truth; God’s word is the only truth,” “God made them male and female” and “Woe to those who quarrel with their maker,” the last two quoting from Genesis 1:27 and Isaiah 45:9.

A petition had also been launched expressing concern that the borough “is bringing perversion from the nightclubs and sexually charged pride parades into the library with children” and that “[t]rusted officials and library staff are promoting a foul-mouthed adult entertainer named “Annie Christ” (a hateful attack on Christianity) as a role model to our small children.”

Counter-protestors, or supporters of the event, held signs outside such as “Love thy neighbor,” “Children need models, not critics,” and “It’s never too late to give up your prejudices.”

“I’m actually a boy in a dress with a really, really big wig on and a lot of makeup,” Torres, who also used the event as a food drive in light of the concerns, told the children gathered.

Supporters went on to launch a petition of their own, calling for Feb. 2 to be deemed “Annie’s Day.”

“On February 2nd 2019, Drag Queen Miss Annie read stories of acceptance, love, and inclusion at the Lansdale Public Library. When word got out, protesters flocked to the internet to try to put a stop to the story time. They created pages of hate and tried to distract the public from the good Miss Annie was trying to accomplish,” the petition claimed.

“I propose we make February 2nd ‘Miss Annie Day’ or ‘Annie’s Day’ where we celebrate the love, acceptance, and charity our little town displayed,” it stated. “This is a day that will forever live in the town’s history. It is a day Lansdale showed how diverse and amazing it is to the entire country.”

While officials did not heed the former petition, Hebert has now responded to the latter and has stated that he will issue a proclamation deeming Feb. 2 “Inclusion Day.” He plans to read his decree during the next business meeting on March 20, according to North Penn Now.

Torres has also announced that “[e]very year on Feb. 2, I plan on hosting an amazing event that will celebrate acceptance and diversity along with a food drive to continue to help our town become the best in Pennsylvania!”

However, local resident Steve Piotrowski, who organized the initial prayer rally outside of the event, expressed disappointment that the borough has chosen to celebrate sin. He released a statement sharing the gospel with those who would read his words, noting that the right kind of inclusion is inclusion in the kingdom of God—and there are conditions for entry.

“Jesus was and is without sin, yet He has compassion for sinners. As we reach out to those in LGBT community, we strive to do so with a similar heart. What could be more heartbreaking than for a person made in God’s image to remain lost in their sin and forever separated from the love of God?” Piotrowski asked. “We want others to be ‘included’ in the Kingdom of God, and we hope to continue to reach lost souls.”

Piotrowski also opined that he finds “Inclusion Day” to be hypocritical because the opinions of only some residents will actually be included, and those who believe God’s word will be excluded.

“This is a day of hate against God,” he stated. “I encourage everyone to read the story of Sodom and Gomorrah. We are calling the mayor and every official who supports this to repentance.”

As previously reported, the Bible teaches that all men are in the same predicament: All are born with the Adamic sin nature, having various inherent inclinations that are contrary to the law of God and being utterly incapable of changing themselves. It is why Jesus outlined in John 3:5-7 that men must be regenerated by the second birth, and pass from spiritual death into spiritual life, or they cannot see the kingdom of Heaven.

2 Corinthians 5 also outlines, “For the love of Christ constraineth us, because we thus judge, that if one died for all, then we’re all dead. And that He died for all, that they which live should not henceforth live unto themselves, but unto Him which died for them, and rose again.”