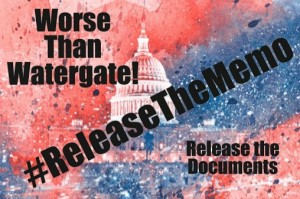 On Thursday, Republican members of the House took to Twitter to call for the release of a classified intelligence memo they say could blow the lid off the Russian collusion investigation. House Intelligence Committee Republicans voted to make a classified report on FISA abuse available to House members, who could read the report behind closed doors.

Rep. Matt Gaetz (R-FL) appeared on Fox Business Network, where he stated that the memo challenged “the very foundations of democracy,” adding, “if the American people knew what was happening if they saw the contents of this memo, a lot would become clear about the information that I’ve been talking about the last several months.” The memo concerns the Obama FBI, Department of Justice, and then-candidate Trump.

Gaetz added, “I think that this will not end just with firings. I believe there are people who will go to jail. You don’t get to try to undermine our country, undermine our elections, and then simply get fired.”

Rep. Mark Meadows (R-NC) stated, “I viewed the classified report from House Intel relating to the FBI, FISA abuses, the infamous Russian dossier, and so-called ‘Russian collusion.’ What I saw is absolutely shocking.”

So, what could be in the memo? An educated guess would suggest that the memo shows that the FBI initiated its investigation based on the so-called Steele Dossier, a compendium of opposition research compiled by Fusion GPS on the instructions of the Democratic National Committee.

If it is indeed the case that FISA warrants were requested on the basis of DNC-funded opposition research, that would appear to politicize the FBI in serious ways. Lee Smith of Tablet Magazine correctly writes:

[I]f the FBI and Department of Justice used a piece of opposition research paid for by a political campaign as evidence for a warrant to intercept the communications of a rival campaign—and the questions asked by congressional investigators suggest they did—then we are now living in a very different America than the one that generations of civil libertarians and small-government conservatives alike desired to maintain, and which large majorities in Congress have repeatedly voted for. The DOJ, the FBI and perhaps the CIA would be embroiled in a scandal likely to have long-lasting and sweeping consequences for intelligence collection, national security, and the safety and privacy of American citizens, to say nothing of how it will demoralize federal law enforcement, which will appear to be mired in partisanship and political corruption. Even more disconcerting is the increasing likelihood that the Steele dossier was used as a platform for a Russian information operation, which successfully managed to leverage nearly the entire American press corps and sections of the security bureaucracy toward the goal of encouraging Americans to rip their own country apart.