Peru’s dream of a World Cup: A lesson for missions 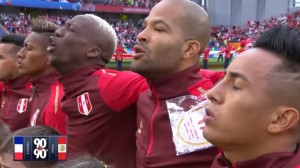 YEKATERINBURG, Russia (BP) — Tears streamed down the cheeks of thousands of Peruvians who traveled to Russia only to see their World Cup dream end with an 0-1 loss to France at the Ekaterinburg Arena in Yekaterinburg.

Yet, what mattered — what Peruvians savored — is that after 36 years on the outside, their national soccer team contended as a World Cup team. No longer watching from the sidelines, they got in the game. Arriba Perú!

During the World Cup or the Olympics, the world seems fairer. Countries of disparate political, social and economic power play as equals.

Likewise, in the body of Christ, Jesus calls people of all backgrounds to participate as equals, and He gives all members spiritual gifts and power, equipping everyone to take the Gospel to others. Rich, poor, Jews, Greeks, men, women — all.

Despite the biblical call of equitable participation, self-perception of the church in many nations does not line up. But things are changing, as missiologist Paul Borthwick wrote in “Western Christians in Global Mission”: “More and more countries are owning the vision to be part of the global Christian missionary enterprise. We hear it in the phrase that the church is going from every nation to every nation” (p. 37).

Yet it remains easy for the U.S. church to see itself — even subconsciously — as the mission force and the rest of the world as the mission field. And why do so many believers in other nations seem to concur?

Peru’s World Cup experience helps answer the question. During 36 years on the sidelines, “We had a defeated spirit,” Eduardo Alfaro, a Peruvian in his 50s, explained. Social upheaval shrouded Peru’s football glory days in a war between the government and Neo-Maoist terrorists of the Shining Path Movement that lasted from 1980 to 2000.

As for football, “We were conditioned to lose. We didn’t have the spirit to win,” Alfaro said. No longer contenders, most Peruvians rooted instead for Brazil, which became Peru’s team by proxy. Peruvians came to believe they weren’t World Cup material. Peruvian football heroes were legends of the past.

In 2015, however, all that changed. Newly appointed manager Ricardo Gareca started to foster a team mentality, a winning mentality. Peruvians united behind their team as the World Cup dream appeared more and more attainable.

But the press began to focus on star player Paolo Guerrero. All the publicity made Peruvians believe “Guerrero would be our savior,” Alfaro said. “The coach did not put Guerrero in the first part of the first game because he wanted the team to see themselves as a team and not look to one individual.” But the press had already made the nation and the team believe their hope rested on the star player’s shoulders, Alfaro recounted.

It “divided and turned the team into individuals and sowed fear, giving the idea that without Guerrero it would not be possible to win,” Alfaro said. “Actually, without him, they might have gelled better as a strong team.”

Bad messaging has historically divided and weakened the global church as well. Colonialism perpetuated the notion that conquering countries were inherently better at building and establishing than those they colonized. Despite the eventual political autonomy of colonized countries, the inferiority complex — and the West’s seeming superiority complex — persisted even in the churches.

“We Peruvians never had the idea that the one to bring the Gospel would be a national,” Alfaro said. “Rather a … European or American missionary — all the more if it were a white person. … This concept came from generations back — from our ancestors. Missions always was foreign. It came from elsewhere.”

Peruvians still tend to think this about doctors, politicians and religious leaders, Alfaro said, but the stereotype is starting to loosen its hold. And the conflicted mindset is not unique to Peru.

The concept of a few nations with fancy resources being the players and the rest of the world being the mission field is as outdated as colonialism. And you won’t find it in Scripture — those who receive are called to give. When it comes to making disciples of all nations, the church in every country qualifies, based on the redeeming sacrifice and calling of Christ.

As national churches in Peru and other majority-world countries delve into missions and ministry, they are becoming players in their own right and equal partners with Western churches. They do not want to be anyone’s charity object or ministry project. They simply want the opportunity to participate, to get in the game, to be partnering, leading and serving.

As the body of Christ, we are one team. We can learn from Peru’s mistake of looking to Paolo Guerrero as the team’s savior and squelch the divisive notion that the church in any one or a few countries determines the outcome of mission endeavors. The only one we look to as a Savior is Jesus Christ. His followers throughout the world are called to be His servants, like Paul and Apollos, through whom the nations may believe.