Pesticide DANGERS: The Poison Papers expose decades of collusion between industry and regulators 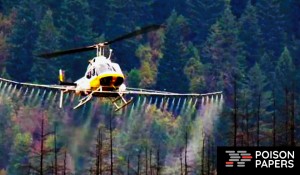 (NaturalHealth365) A massive cache of documents and correspondence between regulatory agencies and the chemical industry has now seen the light of day – and it exposes a stunning pattern of collusion and deceit. Over 200,000 documents – including study summaries, internal secret memos, meeting minutes and sworn testimonies – attest to the fact that both industry and regulators were aware of the extreme toxicity of many chemical products, and conspired to hide this information from the public.

The explosive papers became news on July 26, when the online publication The Intercept published an interview with author and archivist Carol Van Strum.

Undeniable evidence: Federal agencies and chemical manufacturers were “in bed” together

Naturally, the most obvious question is, ‘who are the major players in the Poison Papers?’ The answer reveals many people at the highest levels of government regulation and corporate industry.

Federal regulatory agency sources implicated in the scandal include the U.S. Environmental Protection Agency (EPA), the United States Department of Agriculture Forest Service, the U.S. Food and Drug Administration (FDA), and the U.S. Department of Defense. The chemical manufacturers include Dow, Monsanto, DuPont and Union Carbide.

In addition, the toxic chemicals referenced in the documents include 2,4-D, Dicamba, permethrin, atrazine and Agent Orange – all of which continue to be manufactured and sold. In fact, it’s “business as usual” for 2,4-D, which has just been authorized by the EPA for use on Dow’s new GMO 2,4-D-tolerant soybeans – in spite of the fact that it is contaminated with dioxins.

To be clear, the Poison Papers are not just testament to deception and collusion that occurred in the past – they also reflect betrayals of the public that are ongoing to this day.

The full impact of the papers probably has yet to be realized – as they are still being absorbed and analyzed by environmental activists. But, several incidents already stand out as particularly stomach-turning.

Two documents show that Dow contracted a University of Pennsylvania dermatologist to conduct experiments on prisoners in the 1960’s in order to study the effects of TCDD, a toxic contaminant found in 2,4,5-T. (FYI: 2,4,5-T was one of two active ingredients in Agent Orange, and has been shown to cause cancer and birth defects, along with harming wildlife and the environment)!

A 1985 document reveals that Monsanto sold a TCDD-tainted chemical to the manufacturers of Lysol, who – unaware of the extreme toxicity – employed it for 23 years as an ingredient in their popular household disinfectant spray.

To make matter worse, a 1990 document reveals the EPA’s policy of allowing the use of hazardous waste in pesticides. So much for the notion that the EPA is designed to ‘protect’ public health.

The scope of the deception is truly breathtaking

Among other outrages, the agencies failed to inform the public of the dangers of dioxins, and failed to reveal evidence of fraudulent testing involving the toxin – as well as many other pesticides and synthetic chemicals.

For example, a secret high-level dioxins working group at the EPA acknowledged that dioxins are extraordinarily poisonous chemicals – yet the agency suppressed the fact that dioxins were found in everyday products such as diapers and coffee filters. And, the EPA suppressed its own research that found high levels of dioxin in environmental samples and human breast milk following routine use of 2,4-D and 2,4,5-T (Agent Orange) by the federal Forest Service and Bureau of Land Management.

In addition, more than 800 safety studies were non-existent, fraudulent or invalid. Yet the EPA colluded with pesticide manufacturers to keep invalidly registered products on the market.

In yet another sickening fact: a Monsanto chief medical officer admitted knowing that Monsanto’s dioxin studies were fraudulent – although they were used to defend chemical companies in lawsuits brought by veterans claiming damage from Agent Orange.

The Poison Papers are a project of the Bioscience Resource Project and the Center for Media and Democracy, with author and activist Carol Van Strum responsible for the collecting and archiving.

Carol Van Strum began collecting documents in her 1974 attempt to stop the Forest Service from spraying 2,4,5-T – which it continued to do until 1983, despite the fact that wildlife in the area began showing grotesque defects such as backwards feet and misshapen beaks.

The documents were obtained through Freedom of Information Act requests, as well as through legal discovery in lawsuits against chemical companies and regulatory agencies.

You can read Sharon Lerner’s entire article on Carol Van Strum: “100,000 pages of Chemical Industry Secrets Gathered Dust in an Oregon Barn for Decades – Until Now” at theintercept.com/2017/07/26/chemical-industry-herbicide-poison-papers