Philippines President Duterte Apologizes to God for Calling Him ‘Stupid’

[CBN News] In a speech, the president asked, “Who is this stupid God? You created something perfect and then You think of an event that would destroy the quality of Your work. How can you rationalize that God? How can you believe Him? So now we’re all born with an original sin. Even in the womb, we already have sin. What kind of religion is that?”

Now, Duterte is apologizing for his rant. Local media reports Duterte made the apology during a meeting with evangelist Brother Eddie Villanueva on Tuesday. 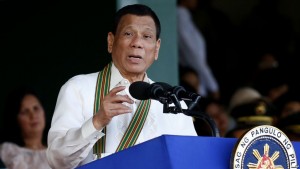 Villanueva is the founder of one of the largest Christian churches in the Philippines. He and other leaders made an appeal asking for a public apology to God for “committing the highest form of blasphemy by mocking and cursing God.”

Duterte’s apology was posted by the Presidential Communication Operations Office on Facebook.

Duterte said in the video, “If it’s the same God, I’m sorry, that’s how it is. Sorry, God. I said sorry God. If God is taken in a generic term by everybody listening, then that’s well and good.”

Duterte continued saying he won’t apologize to his critics who he says should “never use the name of God to attack government.”

“I only apologize to God, nobody else,” Duterte said. “If I wronged God, He would be happy to listen. Why? Because my God is all forgiving. Why? Because God created me to be good and not bad.”