Physicist Theorizes Earth is a School for Human Souls 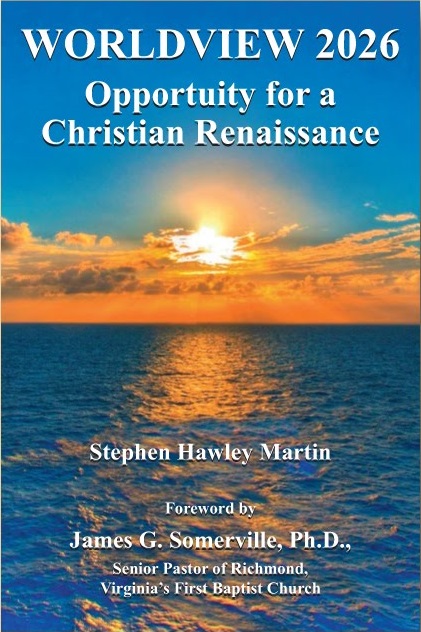 RICHMOND, VA – The scientist calls them “individuated units of consciousness,” but to author Stephen Hawley Martin, a Christian, “souls” is a more descriptive moniker. The physicist says they’re on earth and have bodies in order to evolve and thereby reduce their entropy. According to Martin, that’s another way of saying we humans are here to learn to do what Jesus said to do, which is to love one another.

Martin spent two years interviewing hundreds of individuals on the cutting edge of their disciplines, including psychiatrists, psychologists, quantum physicists, near death survivors and researchers, and those studying paranormal phenomena. He maintains it’s apparent a new worldview is rapidly emerging and the scientific-materialist view that took hold following the publication of Darwin’s “Origin of Species” is headed to the dustbin of history. One result of his efforts is a new book, “WORLDVIEW 2026: Opportunity for a Christian Renaissance,” the foreword of which was written by James G. Somerville, Ph.D., Senior Pastor of Richmond, Virginia’s First Baptist Church, one of the largest in the mid-Atlantic.

“The community of believers has a big opportunity to reverse the decline in Church membership,” Martin said. “But Christian leaders first need to understand the emerging worldview and how it validates Christianity so that they can shape perceptions as the new worldview takes hold. Christians need to take the initiative or the opportunity will pass. By 2026 I believe it will be predominate and pretty much set in stone.”

“I feel a sense of urgency to get the word out,” he said. “If this opportunity is allowed to go by, I fear a post-Christian world will be the result.”

WORLDVIEW 2026 (ISBN: 1532841043) is now available on Amazon. It is published by The Oaklea Press in trade paperback and distributed by the independent publishing platform, CreateSpace.