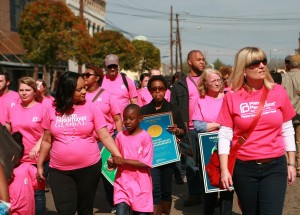 It’s well known many scared teenagers and women approach Planned Parenthood, desperate for help. But like sheep to the slaughter, these poor women don’t know what they are getting involved with. Planned Parenthood has done everything from covering up sexual assault to lying about their real agenda. They’ve even persuaded parents to talk about “transgenderism”, with their preschoolers.

Weaving a web of deception, Planned Parenthood still claims they do no wrong, and millions of Americans still back their clinic. While conservative women know better, not everyone does. However, the truth is starting to come out.

“Celebrating the new East Side location, which effectively replaces a downtown facility that was shut down in March 2016, Planned Parenthood Southeast president Staci Fox reminded the world about the long-term business strategy for the nation’s leading abortion chain: Target minorities and poor people, then profit off them through abortion.

“Predominantly our patients are about 15-29 years old, women of color living at 150 percent or more under the federal poverty level and those are the women who qualify for Medicaid,” Fox told NPR.

Each year, over 33,000 preborn children are aborted in Georgia — each representing a boost for Planned Parenthood Southeast’s bottom line.”

Fox’s comments bragged at the fact her organization serves young minority women, luring them to get abortions. And as Mommy Underground previously reported, one of the most dangerous places for a black child to be is inside its mother’s womb. Sadly, these scared women think they don’t have a choice, but they do.

But Planned Parenthood is determined to make a profit off the backs of struggling young women.

“Founded by eugenicist Margaret Sanger, whose stated purpose was to purify the human race by ridding it of “human weeds” she considered a “clog” to society, the overwhelming majority of Planned Parenthood abortion clinics — including the new site in East Atlanta — are located within walking distance of predominately black or Hispanic neighborhoods.

While Blacks and Latinos make up just 13 percent and 18 percent, respectively, of the U.S. population, they combine for 53 percent of abortions each year, according to the pro-abortion Guttmacher Institute.”

Women need to wake up and speak the truth on Planned Parenthood. Targeting defenseless women, all to make a profit is shameful, to say the least. Every day, innocent lives are taken at the hands of Planned Parenthood. But those who run the pro-abortion clinics, don’t care, as they seek to target minorities and other young women.