If they sincerely cherish their names and reputations, the principals of Coca-Cola, Ford and Xerox should launch a joint lawsuit against Planned Parenthood.

Until the scandalous video showed their doctors talking about the sale of aborted baby parts as ‘taking care of business’, the names of the three multi-nationals, among others, were being openly advertised as corporate sponsors on the Planned Parenthood website.  The purveyors of selling aborted baby parts have linked their names to infamy, and in fact disgraced all corporations boldly named on the Planned Parenthood website.

Members of the public at large have taken to the Internet calling for a boycott on the products of these companies thought to be in league with the baby killers. 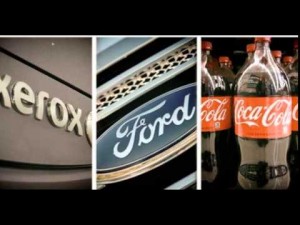 Removing the list means the corporate donors who continue to support Planned Parenthood are now anonymous and will be able to carry on their support under the cover of covert secrecy.

“This latest development comes in the wake of two undercover videos that showed Planned Parenthood executives talking about the sale of fetal body parts. Planned Parenthood is facing both federal and state investigations—and the possibility of losing taxpayer funding. (Daily Signal)

If Coca-Cola, Ford and Xerox did not agree to be corporate donors of the baby killing organization,  that means Planned Parenthood lied, and likely used that lie as a means to lure other businesses to their corporate sponsor list.

What organization with any integrity would want to be linked to an organization whose doctors, one, Dr. Debora Nucatola, Planned Parenthood’s Senior Director of all medical services, talking between bites of salad washed down with red wine about which part of the babies’ bodies should not be “crushed” in going for valuable parts that can be harvested for profit;  and another doctor, Dr. Mary Gatter, the president of the Planned Parenthood Medical Directors Council talking of her dreams about owning a Lamborghini while talking about the sale of vital organs of aborted babies, both of whom whose characters would lend themselves well to a Hollywood horror movie?

It would in the interest of any investigative journalism that still exists to find out how organizations are “erroneously” listed by Planned Parenthood.

“A representative from Coca-Cola confirmed for The Daily Signal the company does not contribute to Planned Parenthood, nor does it match employee contributions to the organization. (Daily Signal)

Planned Parenthood which was paid more than $500 million a year from government taxpayer funds, is giving a bad name to the thousands of organizations out there operating as reputable nonprofits.

It’s not the delisting of Coca-Cola, Ford and Xerox a scandalized public is waiting for.  Millions of people worldwide are waiting for the day Planned Parenthood delists by taking itself right out of the abortion business.

For its now legendary cruel and haughty treatment of innocent babies in the womb, including its heartless preying on poor black women, Planned Parenthood should delist itself and find the nearest hole into which to climb.