Kenyan police officers raided and shutdown a radical Sunni madrassa (Islamic school) for using an extremist Islamic curriculum. The madrassa which was targeted by police, is said to be connected with Kenyan family members of the President of the United States, Barack Hussein Obama, according to reports overseas. 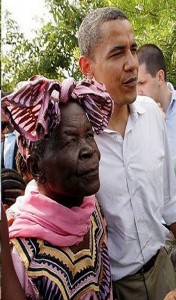 While the news story has been missing in action in the United States media, police response to recent terrorist attacks has been covered in Europe, the Middle East and Africa, including the radical madrassa linked to President Barack Obama’s relatives including his grandmother Sarah Obama, all of whom are self-proclaimed Sunni or Wahabbi Muslims.

The school is located about 40 miles away from Kenya’s capital city, Nairobi, and was targeted by cops after Kenyan teenagers and young adults were questioned about their connection to Somali terrorists, most of whom belong to the al-Qaida linked Al-Shabaab.

This Kenyan madrassa was the first one raided and “boarded-up” by police for allegedly instructing students in extremist ideology. According to Jeffrey Lazaras, a homeland security consultant, the Kenyan national police warned other madrassas that they “need to cleanup their act” or risk closure and worse — arrest.

According to a police counterterrorism advisor, Walid Shoebat, “While discussion of Obama’s connections to his Muslim family in Kenya is an acceptable topic for discussion in the Arab world, it is viewed as a great taboo in the United States. But why is that so? This taboo should be considered unfair at best, purely prejudiced at worst. Is it fair, after all, that we censor such discussions just because Obama’s relatives are Muslim?”

Several Muslim rights groups have condemned Kenya’s police operations, but they respond to activists saying Somalia’s terrorist group has crossed the border numerous times and carried out a series of attacks in Kenya. The al-Qaida affiliate claims the attacks are revenge for Kenyan troops taking part in the African Union’s anti-terrorism operations in Somalia that has included the killing of Muslims.

In 2013, the world looked in horror as 67 shoppers were killed in Westgate Shopping Center when the Al-Shabaab terrorists attacked Nairobi’s busiest shopping mall. The recent arrest in the Machakos area of 21 young men suspected of being recruited for al-Shabab first raised suspicions about the madrassa, believed to have been funded by Mama Sarah Obama Children Foundation.

The Obama “charity” is also known as the Sarah Obama Benevolent Fund Institute and its stated mission is “to make a lasting impact on the lives of the orphans and underprivileged children by improving their housing, their education, their upbringing,” which “continued to weigh heavily on Mama Sarah.”

“In fact, Grandma Sarah claims on her website that her goal is to ‘transform Kenya.’ Where have we heard that goal before?” quipped Lazaras, who served as a police special operations officer and hostage negotiator. Lazaras also points to radical Islam expert Walid Shoebat’s investigation of the Kenyan Obama clan:

Grandma Obama’s foundation “raises 90% of its monies primarily from donors in the United States and some from Europe,solicited as humanitarian aid — as the promotional website advertised: “to make a lasting impact on the lives of the orphans and underprivileged children by improving their housing, their education, their upbringing,” which “continued to weigh heavily on Mama Sarah.”