In the document—a form of papal teaching known as an “encyclical”—Pope Francis appealed to biblical ideas of stewardship to denounce pollution, lament loss of biodiversity, and call for action to mitigate the effects of climate change.

“The earth, our home, is beginning to look more and more like an immense pile of filth,” Francis wrote. “[The earth] now cries out to us because of the harm we have inflicted on her by our irresponsible use and abuse of the goods with which God has endowed her.”

In the weeks leading up to the publication of the encyclical, observers had speculated whether Pope Francis would blame global warming on human activity and call for a reduction of greenhouse gas emissions.

The simple answers are yes and yes.

“A very solid scientific consensus indicates that we are presently witnessing a disturbing warming of the climatic system,” the pope wrote. Although Francis conceded factors such as “volcanic activity, variations in the earth’s orbit and axis, the solar cycle” play a role in climate, “yet a number of scientific studies indicate that most global warming in recent decades is due to the great concentration of greenhouse gases … released mainly as a result of human activity.” 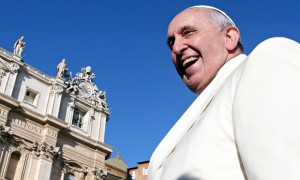 Noting that warming has been accompanied by “a constant rise in the sea level and, it would appear, by an increase of extreme weather events,” Francis concluded: “Humanity is called to recognize the need for changes of lifestyle, production, and consumption, in order to combat this warming or at least the human causes which produce or aggravate it.”

The pope stopped short of endorsing a specific plan to reduce emissions, such as the climate treaty United Nations officials will promote at a summit in Paris in December. But he wrote, “The failure of global summits on the environment make it plain that our politics are subject to technology and finance. There are too many special interests, and economic interests easily end up trumping the common good …”

An Italian magazine published a draft copy of the encyclical earlier this week, angering Vatican officials. The official document published Thursday was largely identical to the leaked draft. Monsignor Kevin W. Irwin, a professor of liturgical studies and sacramental theology at The Catholic University of America, said the pope apparently followed a “precautionary principle” in his statement on climate change.

“That is to say, if the data is going in that direction, and this is harming people, it’s better to offend in the direction of prevention and cure, rather than waiting for the science to be perfect,” Irwin said.

But Jim Lakely, a spokesman for The Heartland Institute, said Francis “still has a lot of the science wrong” because he relied on a UN climate panel for his information.

“In fact, satellite measurements of atmospheric temperatures show no global warming trend for 18 years and six months,” Lakely said. “Extreme weather has been declining for decades.”  Although it’s true that seas are rising, Lakely said, they’ve been doing so since the last ice age ended.

Heartland organized a press conference in Rome in April to provide an alternate view on climate change. Lakely said the Vatican was aware of his group’s presence, but it’s unclear whether the press conference had any impact on the pope’s encyclical.

The document was not primarily about global warming—only 2 percent of the encyclical dealt with climate issues. Instead, Francis pointed to the biblical book of Genesis as calling mankind to “‘till and keep’ the garden of the world. … This implies a relationship of mutual responsibility between human beings and nature.” He rejected a view of “dominion” that encourages “the unbridled exploitation of nature,” and emphasized an integrated relationship between nature, the environment, economics, and poverty.

“Each year hundreds of millions of tons of waste are generated, much of it non-biodegradable, highly toxic, and radioactive, from homes and businesses, from construction and demolition sites, from clinical, electronic, and industrial sources,” Francis wrote. “In many parts of the planet, the elderly lament that once beautiful landscapes are now covered with rubbish.

“Many cities are huge, inefficient structures, excessively wasteful of energy and water. Neighborhoods, even those recently built, are congested, chaotic, and lacking in sufficient green space. We were not meant to be inundated by cement, asphalt, glass, and metal, and deprived of physical contact with nature.”

The pope said human activity was largely to blame for the “disappearance of thousands of plant and animal species which we will never know, which our children will never see.”