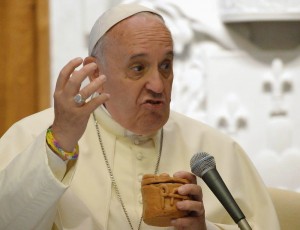 “The US President has been met with international condemnation after reports he plans to recognise Jerusalem as Israel’s capital … Pope Francis called on ‘all to respect the city’s status quo, in accordance with the relevant UN resolutions’ …”

“In a dramatic declaration punctuated by dire threats and warnings, the Vatican is urging the world to ‘decarbonize the energy system as early as possible and no later than mid-century’ to avoid irreversible damage to humans and ecosystems … In its newly released ‘Final Declaration: Our Planet, Our Health, Our Responsibility’ from a November workshop on climate change, air pollution and health, the Pontifical Academy of Sciences warns that there is less than a decade to put in place a series of sweeping measures to counteract the effects of human-induced climate change. ‘The time to act is now’, it reads.”

More than any other Pope, Francis I has spread his reach to an entire world, on many diverse subjects. In so doing, he is solidifying his future role as the top religious leader of the New World Order Religion, also known as the False Prophet of Revelation 13:11-18!

This world is steadily marching forward to the final events of the Book of Revelation!