Prayer Warrior in Liberia Healed of Ebola After Touch From God 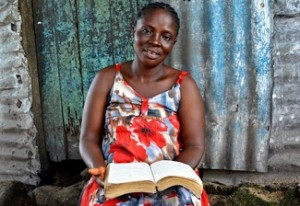 This woman of faith lives in a one-room tin house with holes in the walls in a crowded section of the capital of Liberia. Her most-prized possession is a well-worn Bible, a sword she wields – along with fervent prayer – as Ebola ravages her church and her neighborhood.

“Only God knows where we are heading to now,” Dorothy Sawer, 48, told the Los Angeles Times. Sawer is an abandoned wife caring for six children in impoverished circumstances – but she has her faith.

That faith – in the midst of the devastating epidemic – is often ridiculed by her neighbors. “Sometimes I pray loud; sometimes I pray louder,” she told The Times. “My neighbors get vexed. They get angry. People laugh at me and mock me. They say, ‘Every day, it’s God, God, God business.’ These neighbors say that’s all they hear.”

When Sawer was 10-years-old, she had her first personal encounter with God. She saw a flash of light and a white man with long hair appeared out of nowhere, his back turned. Then he disappeared as quickly as he had arrived.

“I believe that was the angel of God that I saw,” she told The Times. From then on, she had “spiritual fits” and had to drop out of school.

She also received prophetic words for people close to her. As a result, Sawer might warn them not to take a certain road on a particular day. “People didn’t listen. There would be consequences,” she noted. (Sawer says her former husband was attacked by thieves after he ignored her warning.)

Some of her friends began to recognize her spiritual discernment. Four years ago, Sawer joined the prayer team at Conqueror’s Tabernacle, led by Pastor Varney Garpou.

Ebola first arrived in Liberia in March, then died down after a few cases. But in July it re-emerged with a vengeance, killing staff members at New Kru Town’s Redemption Hospital before devastating the local community.

In Liberia’s capital, Monrovia, it has killed nearly 2,500 people as of Oct. 17. The cases in West Africa will reach 10,000 within weeks, according to The Times.

“Be careful with this Ebola thing. Be careful,” Pastor Garpou told Sawer. Some churchgoers at Conqueror’s Tabernacle say Ebola is a sign of the Last Days. Some say it’s a punishment, or something Satan brought. Sawer is certain it is a spiritual disease, not just a physical sickness, she told The Times.

Although she heard the government warnings not to touch people with Ebola, “I wasn’t afraid because I believed God was with me.”

But Pastor Garpou was deeply troubled about Ebola and told his wife, Willet, a nurse, to pull back from her treatment of their neighbors. In August, people were knocking on the pastor’s door several times a day looking for medicine.

That month, the virus hit the ramshackle house next to the pastor and his wife. A mother of three was the first to succumb; she died in a wheelbarrow on the way to a clinic. Four people in the house died, including a tailor and his child. The tailor’s wife was the next one in the house to develop symptoms of Ebola.

Willet Garpou couldn’t stand by and let the woman die, so she treated her with injections for a week. Two weeks later, Willet herself developed symptoms of Ebola.

Sawer prayed with Willet morning and night. She helped her dress, and even touched her feet. But Willet died at home, and within days, Sawer was called again, this time to pray for Pastor Garpou’s healing.

Despite her prayers, he too passed to his reward.

“I believe maybe it’s God’s will,” Sawer told The Times. Still, she wondered why God didn’t heal a man like her pastor.

Soon, Sawer herself felt unusual symptoms that began with intense burning in her stomach. She fasted and prayed for three days, but the symptoms kept getting worse. She decided to have her oldest son Tim, 25, care for the rest of her children and she went to an Ebola treatment unit.

Even when they confirmed she had Ebola, she says she felt no fear or doubt. She was convinced that if she bathed her situation in prayer and dwelt in the presence of the Lord, she would survive. The first thing she requested at the treatment center was her Bible.

The worst-case scenario she faced would be heaven, rejoicing in the Lord’s presence for eternity.

As she lay in bed, with her temperature soaring, her body sweating and shaking, she felt like her torso was on fire. “It was the worst sickness I ever had,” she told The Times.

Then something remarkable happened. Just as she had experienced a visitation in her youth from a heavenly messenger, she had a personal encounter with God as she hovered between life and death.

“One night I felt a hand patting me on my shoulder,” she recounts.

“I don’t know who touched me. I think it was the spirit of God.” The next morning, she was healed!

Exulting in God’s goodness and healing mercies, she jumped out of bed that morning and marched around the clinic, urging the other Ebola patients to have faith in God.

She began to hold devotional meetings at the clinic twice a day, with bold prayers for healing, along with hymns. Even the nurses in their protective suits joined in, clapping and singing. Sawer also helped to feed and care for children whose parents or siblings were sick with Ebola.

A few days later, she discovered her oldest son, Tim, had contracted Ebola. He went for treatment, and for weeks, she heard nothing, She prayed fervently for her son’s survival. By God’s grace and mercy, her prayers were answered and her son returned home – completely healed.