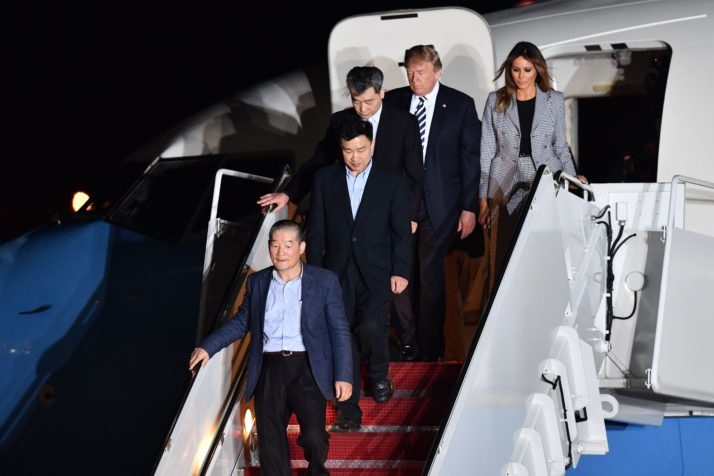 US President Donald Trump (2nd R) and his wife Melania Trump (R) walk down the stairs with US detainees Tony Kim (2nd L), Kim Dong-chul (bottom L) and Kim Hak-song (C) upon their return after they were freed by North Korea, at Joint Base Andrews in Maryland on May 10, 2018. – US President Donald Trump greeted the three US citizens released by North Korea at the air base near Washington early on May 10, underscoring a much needed diplomatic win and a stepping stone to a historic summit with Kim Jong Un. (Photo by Nicholas Kamm / AFP) (Photo credit should read NICHOLAS KAMM/AFP/Getty Images)

“We thank God, and all our families and friends who prayed for us and for our return. God Bless America, the greatest nation in the world.” -Statement from the three released prisoners

The prisoners were freed after Secretary of State Mike Pompeo traveled to the North Korean capital and met with leaders, including dictator Kim Jong Un. A giant American flag was suspended between two fire trucks on the edge of the taxiway. President Trump and the first lady boarded the plane before the men stepped out, shaking hands with the president and waving.

The men are Korean-American missionary Kim Dong-chul, detained in 2015 and sentenced in 2016 to 10 years’ hard labor. Kim Sang-duk, also known as Tony Kim, who spent a month teaching at the foreign-funded Pyongyang University of Science and Technology before he was arrested in 2017, along with Kim Hak-song, who also taught at PUST and was detained last year.

The three had earlier given their thanks in a statement released by the State Department as their plane stopped over in Alaska. “We would like to express our deep appreciation to the United States government, President Trump, Secretary Pompeo, and the people of the United States for bringing us home,” the men said.

“We thank God, and all our families and friends who prayed for us and for our return. God Bless America, the greatest nation in the world.”

A White House spokeswoman said the three former prisoners would be taken to Walter Reed National Military Medical Center in nearby Maryland for further medical evaluation.

“Frankly we didn’t think it was going to happen and it did,” President Trump said after thanking Kim for releasing the men. “We’re starting off on a new footing. This is a wonderful thing that he released the folks early.”

“I think we have a very good chance of doing something very meaningful,” Trump said. “My proudest achievement will be—this is part of it—when we denuclearize that entire peninsula.”

Just before wrapping up, the president did take time to remember Otto Warmbier, the American college student who was imprisoned and tortured by North Korea and died shortly after his release. “His parents have become friends of ours”, said President Trump. “They are spectacular people and I just want to pay my respects.”

Caption: (Joint Base Andrews, Maryland)— President Donald Trump welcomed home three Americans freed by North Korea and declared their release was a step toward his goal of de-nuclearizing the Korean Peninsula. (Photo: via CBN News)