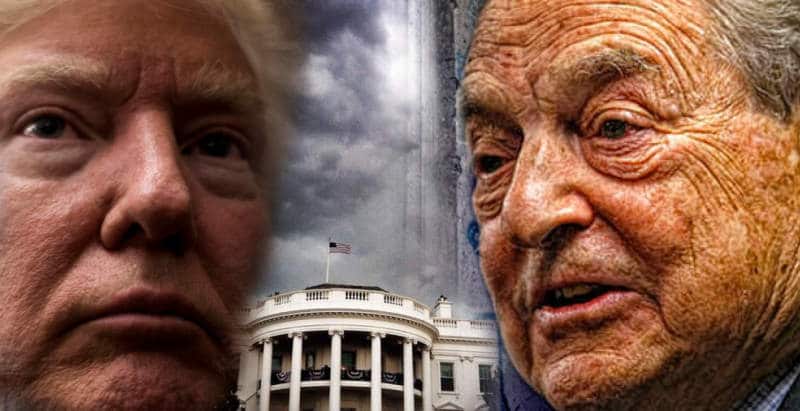 At his inauguration as the 45th President of the United States, President Donald Trump put the globalist establishment that has been selling out America for so long on notice: The American people are back in charge. Quoting the Bible and acknowledging God the Creator as the true source of America’s protection, Trump did not mince words when he described the betrayal of America by the self-appointed establishment. But starting today, Trump said the “historic movement” that propelled his campaign to victory against the entire establishment apparatus was ready to ensure that America will come first. No doubt globalists and establishment types — in both parties — were left squirming in their seats at the thought of it all.

While there was not much talk about the U.S. Constitution or restoring the many liberties that have been eroded in recent decades, Trump’s inauguration speech hit on some very important topics. For globalists and the establishment, it must have sounded like the end is really near. The ceremony, Trump said, has a “very special” meaning. “Because today we are not merely transferring power from one administration to another, or from one party to another – but we are transferring power from Washington, D.C. and giving it back to you, the American People,” he said. “We assembled here today are issuing a new decree to be heard in every city, in every foreign capital, and in every hall of power. From this day forward, a new vision will govern our land. From this moment on, it’s going to be America First.”

Opposing the establishment’s dangerous ideology of globalism, and pursuing Americanism instead, was a center-piece of Trump’s historic campaign — a bid that even his fiercest critics acknowledge defied all the odds, as well as the bipartisan establishment and the media establishment that have for so long sold out America and the Constitution. In his inaugural address taking over as the 45th president of the United States, Trump continued on that theme. “Every decision on trade, on taxes, on immigration, on foreign affairs, will be made to benefit American workers and American families,” he said, emphasizing that “the people” were now back in charge of their government and their destiny. “January 20th 2017, will be remembered as the day the people became the rulers of this nation again.” 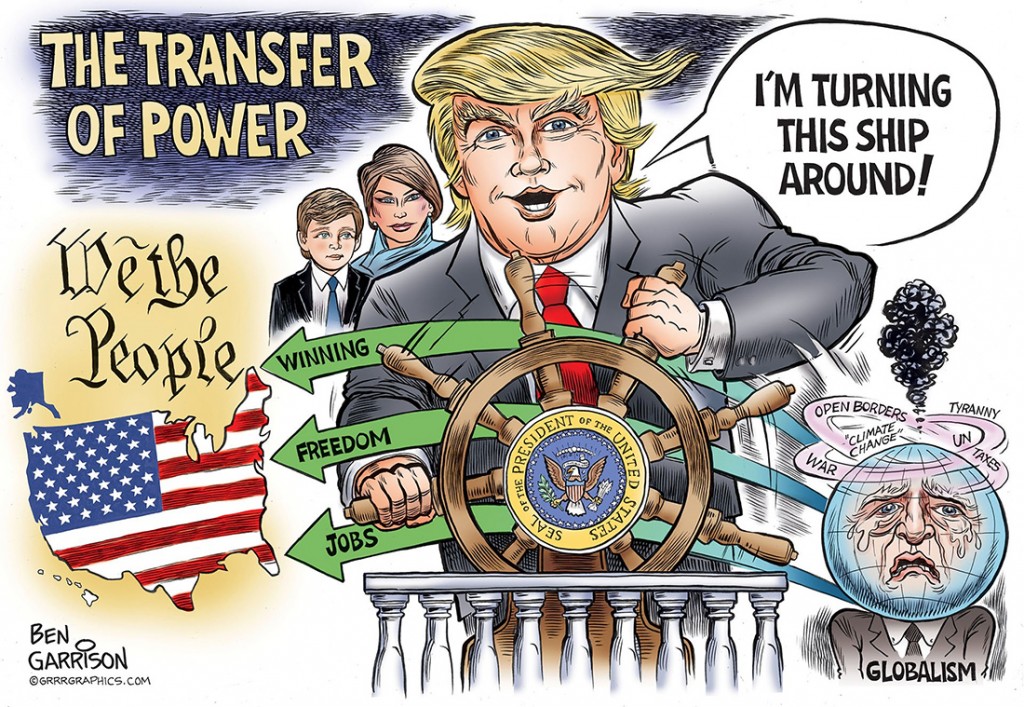 As Trump described it, the American people have finally emerged victorious over a corrupt and dangerous establishment that has long been selling out America for its own benefit. “For too long, a small group in our nation’s Capital has reaped the rewards of government while the people have borne the cost,” he said, as many members of that “small group” that fought him tooth and nail looked on. “Washington flourished — but the people did not share in its wealth. Politicians prospered — but the jobs left, and the factories closed. The establishment protected itself, but not the citizens of our country. Their victories have not been your victories; their triumphs have not been your triumphs; and while they celebrated in our nation’s Capital, there was little to celebrate for struggling families all across our land.”

But today, “that all changes,” Trump declared. “The forgotten men and women of our country will be forgotten no longer,” he said. “Everyone is listening to you now.” Trump also called the movement he has benefited from “historic,” saying the world has never seen the likes of it before. At the center of the movement, he continued, is “a crucial conviction: that a nation exists to serve its citizens.” No doubt globalists, the United Nations, members of the establishment Council on Foreign Relations, and all the other establishment swamp creatures that haunt Washington, D.C., and New York City were recoiling in horror at the new president’s stinging rebuke.

Noting that Americans had “just and reasonable demands” in expecting great schools, safe neighborhoods, and good jobs, the new president said many people exist in a different reality today. Trump painted a dark picture of a crime-ridden America, with rusty, shuttered factories, drug addiction, schools flush with cash but leaving America’s “beautiful students” without knowledge, and other problems. “This American carnage stops right here and stops right now,” Trump said, using a term that was immediately seized upon across social and traditional media as a hallmark of the speech. Of course, the federal government has no constitutional authority over schools, neighborhood safety, or factories — and yet it has managed to practically destroy them all in recent decades through unconstitutional meddling.

But if Trump’s words are to be believed — and the establishment’s unprecedented anti-Trump derangement indicates that he is serious — the selling out of America by establishment globalists is coming to an end. “For many decades, we’ve enriched foreign industry at the expense of American industry; Subsidized the armies of other countries while allowing for the very sad depletion of our military; We’ve defended other nation’s borders while refusing to defend our own; And spent trillions of dollars overseas while America’s infrastructure has fallen into disrepair and decay,” Trump explained accurately, regardless of which party was in power. “The wealth of our middle class has been ripped from their homes and then redistributed across the entire world. But that is the past. And now we are looking only to the future.”

Despite the incredible division fomented by the anti-Trump establishment media, often using lies, Trump called repeatedly for national unity. He took aim at partisan politics and the race-mongers trying to divide America. “When you open your heart to patriotism, there is no room for prejudice,” Trump explained. He also explicitly rejected racism in his call for Americans to be united. “It is time to remember that old wisdom our soldiers will never forget: that whether we are black or brown or white, we all bleed the same red blood of patriots, we all enjoy the same glorious freedoms, and we all salute the same great American Flag,” Trump said. “And whether a child is born in the urban sprawl of Detroit or the windswept plains of Nebraska, they look up at the same night sky, they fill their heart with the same dreams, and they are infused with the breath of life by the same Almighty Creator.”

In yet another reference to God and a nod to the Christian voters who were so crucial in propelling his successful campaign to the White House, Trump also quoted the Bible in his speech. Specifically, Trump referred to Psalm 133:1, which tells of “how good and pleasant it is when God’s people live together in unity.” He also noted that America must rely on divine protection for security. “When America is united, America is totally unstoppable,” he said, adding that there is nothing to fear because America is protected by her military, law-enforcement, “and, most importantly, we are protected by God.” Like virtually all U.S. presidents, including even Obama, who viciously mocked the Bible and those who believe it on multiple occasions during his term, Trump closed with “God Bless America.” 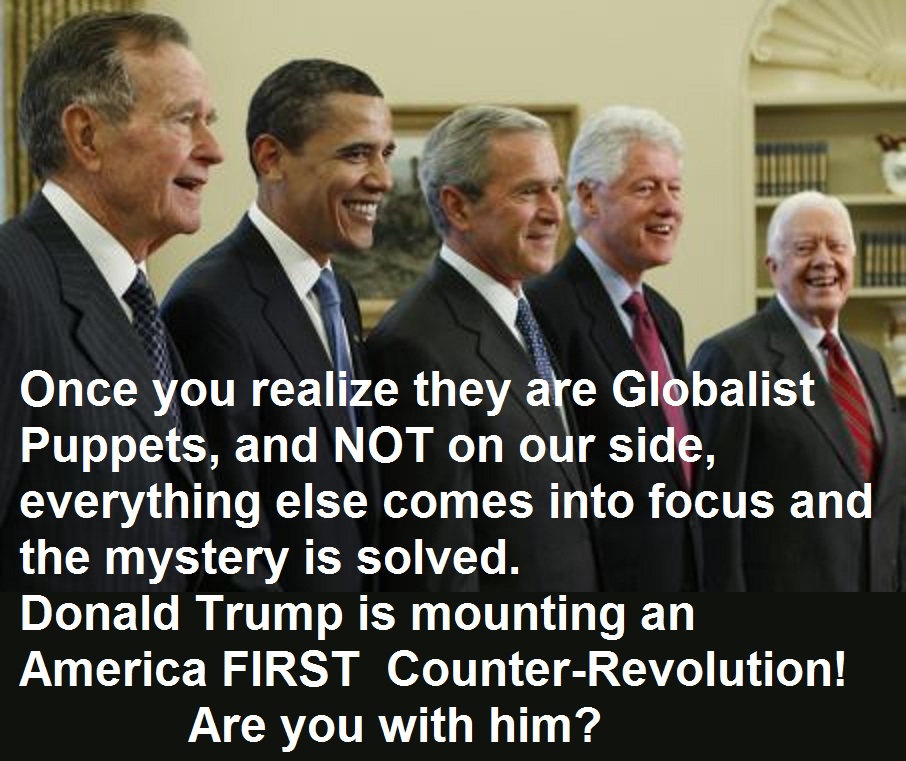 Despite criticism and hysteria by the Jesus haters of the radical Left, a diverse lineup of pastors, clerics, and priests from different Christian denominations prayed over the ceremony. Even a rabbi participated for the first time since Ronald Reagan’s inauguration, said by some analysts to be a reflection of the fact that Trump’s daughter Ivanka is a convert to Orthodox Judaism. Trump took his oath to uphold and defend the U.S. Constitution using two Bibles, the one his mother gave him upon graduation from Sunday Church Primary School in 1955, and the one Abraham Lincoln used at his first inauguration. Vice President Mike Pence reportedly used Ronald Reagan’s family Bible.

As previously documented, the establishment did practically everything in its power to prevent Trump’s victory and destroy his candidacy: lies, smears, false accusations, constant demonization, recount efforts, fake news, bogus “intelligence,” a bid to flip the votes of electors at the Electoral College, vote fraud, and more. But the establishment lost the fight, along with what remained of its credibility and legitimacy. And now, it has openly joined forces with the mass-murdering Communist Chinese dictatorship to preserve what former Vice President Joe Biden this week called the “liberal international order” in front of globalist and communist leaders at Davos.

Whether the desperate bid to preserve the dangerous “world order” globalists have imposed on humanity will succeed or not remains to be seen. But of course, the globalist establishment, which has burrowed its way into practically every power center in America over a period of generations, is unlikely to simply surrender power without a dirty fight. If Trump sticks to his campaign promises and the America First vision outlined in his inaugural address, though, establishment Insiders may finally be playing defense — for years to come. And that would be excellent news for America, liberty, and humanity as a whole.

Reprinted with permission from TheNewAmerican.com.”