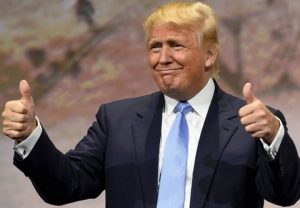 The president announced that a new CDC classification declares churches “essential” and he announced the new policy today at a White House briefing. “If they don’t do it, I will override the governors. In America, we need more prayer, not less,” he stated.

Trump criticized Democrat governors for keeping “liquor stores and abortion centers” open during the coronavirus lock down while keeping places of worship shuttered. “It’s not right,” he said, declaring his move is aimed at “correcting this injustice.”

“If there’s any question, they’re going to have to call me,” Trump said. “But they are not going to be successful in that call.”

The order follows on comments supporting churches on Thursday. “We want them (churches) to reopen. I mean literally, I just got off the phone with CDC and I talked about churches. I said, ‘I want the churches to open.’ And the people want the churches to open, and I think you’ll have something come down very soon from CDC. We want to get our churches back and our country is coming back,” Trump told reporters Thursday.

Churches across the country have been fighting to stay open amid the shutdowns, pointing to how abortion facilities are allowed to keep killing unborn babies in elective abortions but pastors cannot hold services – supposedly because it could jeopardize people’s lives.

Some states, including Mississippi, did include elective abortions in their shutdown orders, but pro-abortion groups sued and successfully blocked many of the orders.