Pro-lifers have high hopes for progress under Trump

(WNS)–American pro-lifers are ready and waiting for President-elect Donald Trump to make good on his campaign promises to curb abortion.

“I think pro-life Americans, like most Americans, are willing to give the president-elect a chance to see how he is going to perform on the issues that are important to us,” said Denise Burke of Americans United for Life. “We are hopeful, given the people he is surrounding himself with, especially his vice president, Mike Pence, who we know is strongly pro-life, that we will see some good results out of this upcoming administration.”

Pro-lifers want to see Planned Parenthood and other abortion providers stripped of taxpayer funding, a ban on abortion after 20 weeks, and the repeal of parts of Obamacare that criminalize the actions of pro-life healthcare workers. 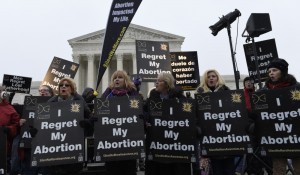 “We expect and hope that Congress will pass a reconciliation package to dismantle key parts of Obamacare and defund Planned Parenthood, and we think that needs to happen pretty soon in the next Congress,” Family Research Council’s David Christensen said. “[Trump’s] been pretty clear on redirecting funds from Planned Parenthood and passing pro-life laws, so we’re optimistic that that’s a commitment that he’ll maintain.”

Most of the Republicans in the Senate are expected to vote in favor of pro-life legislation, and Christensen said his organization would have to “work to push a few Democrats” that lean pro-life to reach the 60 votes needed to move a bill forward.

This September, Trump laid out four pro-life goals, including nominating pro-life justices to the Supreme Court and stripping Planned Parenthood of taxpayer dollars.

Rep. Diane Black, R-Tenn., national co-chairwoman of Trump’s Pro-Life Coalition, said in a written statement, “We can count on his administration to work with Congress in order to advance protections for our most vulnerable members of society.”

Black’s Defund Planned Parenthood Act, passed by the House last September, would remove federal funding from the abortion giant and other abortion clinics and shift money to eligible community health centers if it passed the Senate and was signed by Trump.

Pro-lifers also hope for the enactment of the Conscience Protection Act, which passed the House this July. If it becomes law, the bill would protect healthcare providers or workers who refuse to take part in abortion or, as in the cases of Little Sisters of the Poor or Hobby Lobby, those who have religious objections to the Obamacare contraceptive and abortifacient mandate.

Trump’s presidential win, along with the Republican retention of the House and Senate, was “huge” for pro-lifers, Christensen said: “We’re very excited to see the House and the Senate in a position to move pro-life legislation. We have high expectations, and we’re going to work hard to achieve some of those pro-life goals.”