WASHINGTON—The U.S. Supreme Court spoke plainly and unanimously in striking down a Massachusetts law placing a 35-foot buffer zone around abortion centers: The law “violates the First Amendment.” The zone excluded anyone but abortion center employees and clients. 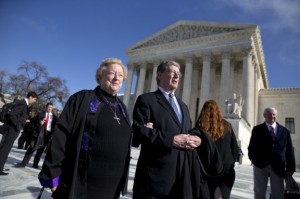 Even in the January arguments, the lawyer for the pro-life counselor challenging the law did not ask the court to overturn its own precedent—but he probably hoped they would anyway.

Roberts kept the ruling limited to the Massachusetts law but called into question any buffer zone laws that restrict access to public areas. He said public areas and sidewalks have special protection under the First Amendment.

“It is no accident that public streets and sidewalks have developed as venues for the exchange of ideas,” he wrote in the unanimous opinion. “Even today, they remain one of the few places where a speaker can be confident that he is not simply preaching to the choir. With respect to other means of communication, an individual confronted with an uncomfortable message can always turn the page, change the channel, or leave the website. Not so on public streets and sidewalks.”

The opinion said the Massachusetts law, passed in 2007, burdened pro-life counselors’ speech because they did not want to yell at the women they were trying to counsel. And at such a distance from the centers, counselors could not distinguish passersby from those heading to the center. At one center, women seeking abortions could park within the buffer zone, and never encounter the counselors. The court suggested a number of “less restrictive alternatives” Massachusetts could adopt to ensure safe access to abortion centers while preserving free speech, like passing a law along the lines of an existing federal statute that forbids obstruction of abortion centers. Roberts tried to clarify that the court was not giving constitutional approval to the suggested alternatives.

Though the ruling was unanimous in striking the law, Scalia wrote a concurrence that sounded a lot like a dissent, saying Roberts’ reasoning was alternately “feeble” and “fanciful,” and the majority “specious.”

“Today’s opinion carries forward this court’s practice of giving abortion-rights advocates a pass when it comes to suppressing the free-speech rights of their opponents,” he wrote, in a concurrence that Thomas and Kennedy joined. “This is an opinion that has something for everyone, and the more significant portion continues the onward march of abortion-speech-only jurisprudence.”

“Every objective indication shows that the provision’s primary purpose is to restrict speech that opposes abortion,” Scalia said.

The opinion leaves murky the status of other buffer zone laws. A case is pending in Wisconsin on the issue, and New Hampshire recently passed a 25-foot buffer zone law. What the unanimous court made clear Thursday is that such laws cannot restrict access to public streets and sidewalks.