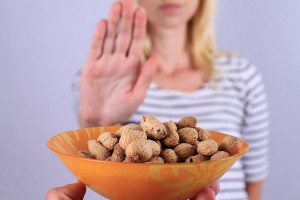 (NaturalHealth365) Food allergies have become increasingly common in the past 20 years – especially thanks to the rise of genetically modified foods and pesticide usage. The most troublesome foods include, milk, egg and soy products. But, besides avoiding these contaminated foods, research out of the University of Melbourne suggest that probiotics can really provide relief.

So, today, let’s focus on a way to end this threat – naturally.

Oral immunotherapy has gained traction and credibility as a treatment for food allergies. A double-blind, randomized, placebo-controlled trial by the University of Melbourne’s Department of Pediatrics in Australia set out to gather further insights.

For the study, 48 children with peanut allergies were examined. They were divided into two groups: those who received oral immunotherapy combined with probiotics, and a control group receiving only a placebo. Both groups were given gradually higher amounts of peanut protein over time for 18 months.

After the study period, the subjects were tested for their peanut tolerance levels. The researchers tested concentrations of the peanut-specific antibodies sIgE and sIgG4. It was found that the vast majority – 82 percent – became tolerant to peanuts.

In the placebo group, however, only 4 percent became tolerant. (No doubt, this says a lot about the value of taking probiotics)

WARNING: Accidental exposure occurs in 15 to 20 percent of children with a peanut allergy

Participants who had become tolerant agreed to follow up with researchers in the four years following treatment to monitor their allergies. They underwent skin prick tests and other assessments of the effectiveness of the treatment. Thankfully, the peanut tolerance held.

So, it’s good to know that he combination of peanut oral immunotherapy (OIT) and probiotics was highly successful. These children enjoyed immediate results – which held up four years later. These results are particularly impressive since nut allergies are often a lifelong health issue for many people.

The researchers believe that consuming probiotics give the immune system a boost, allowing it to handle increasing amounts of a triggering substance. Of course, the best way to avoid allergy symptoms is to enrich the gut with probiotics and stay away from ‘trigger foods’ like conventionally-produced peanut butter or genetically altered soy products.

The biggest fear with any type of allergy is accidental exposure/ingestion. This new combination treatment with probiotics offers tremendous promise to people who would otherwise have to be highly vigilant about their food choices at all times.

The study results are a major step forward in addressing the increasing number of potentially deadly food allergies in children. The ability to overcome allergies in childhood will lead to an increased quality of life for those affected.

Hopefully, these results – which were published in the Lancet Child & Adolescent Health – will encourage other researchers to create even larger clinical studies and insights.