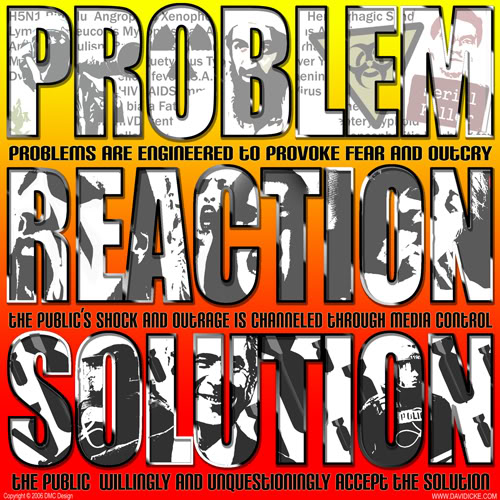 Frequent visitors to Conspiracy Street know that the powerful globalists behind the New World Order are well-schooled in how to wage psychological warfare to achieve their self-serving ends.

One fundamental strategy used time and again was first described by the German philosopher Georg Wilhelm Friedrich Hegel (1770-1831). He developed a dialectic, which is a method of discussion and reasoning by dialogue as a means of intellectual investigation. This is something philosophers do.

Here is a standard definition of the Hegelian dialectic. It is “an interpretive method, originally used to relate specific entities or events to the absolute idea, in which some assertible proposition (thesis) is necessarily opposed by an equally assertible and apparently contradictory proposition (antithesis), the mutual contradiction being reconciled on a higher level of truth by a third proposition (synthesis).”

That’s a mouthful but Hegel’s dialectic boils down to three parts:

Thesis is the problem statement. Antithesis is the counter-argument. Synthesis is resolution by a “higher truth” or new, fourth thesis.

In and of itself, Hegel’s idea seems like a practical, straightforward way to conduct intellectual discourse. But in 1847, the London Communist League, led by Karl Marx and Frederick Engels, invoked Hegel’s theory of the dialectic to justify their economic theory of communism.

A thesis gives rise to its reaction;

An antithesis contradicts or negates the thesis;

The tension between the two being resolved by means of a synthesis.

These three dialectical stages of conversational development reduce to these three parts, corresponding to Hegel’s original theory of Thesis/Antithesis/Synthesis: 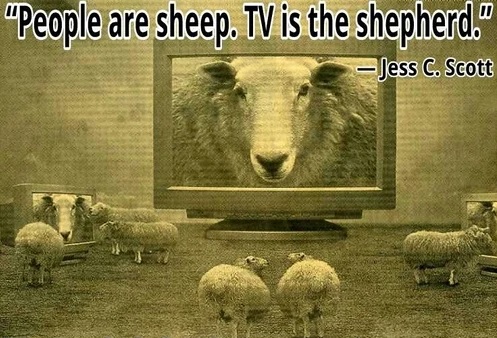 Many conspiracy analysts have spotted the Hegelian dialectic in action repeatedly. The NWO handlers use the controlled mainstream media to create a PROBLEM where there was none before. The public REACTS to the PROBLEM and demands an immediate SOLUTION that was prepared by the same people who created the PROBLEM in the first place.

The SOLUTION always involves actions or legislation that never would have passed public approval under normal circumstances – that is, before the elite Hegelian strategists broadcasted there was a PROBLEM.

Consider these examples that suggest a covert deployment of Hegel’s method:

Since 9/11 and the underwear bomber, to thwart the threat of terrorism (a constant news item) before being allowed in the “sterile” (safe) area inside an airport, passengers must either be dosed by radiation or chance missing the flight by waiting for a hand-patdown. Neither TSA (Transportation Security Administration) nor its parent agency DHS (the Department of Homeland Security) existed before the false flag attacks on September 11, 2001. Today, not even 20 years later, the general public must continue to subject to prison-like conditions at airports – which have become de facto lockdown facilities.

Media scares over swine flu and bird flu flared up and died down but left people sick or permanently disabled from the vaccinations, which were almost mandatory.

“Global Warming” has dominated mass media headlines for years but the real dangers to the environment – such as poisoning from chemtrails and holes in the ionosphere from HAARP – are never covered by the mainstream media.

For decades, the political leaders of the United States have been pushing fictional Wars on Concepts rather than real, declared wars nations. The 1960s saw the failed War on Poverty (1964), War on Drugs (1971), War on Cancer (1971), and now, the unending, unwinnable War on Terror, justified by the false-flag events of 9/11.

Americans wage war by spending oodles of taxpayer money to stop the PROBLEMS of drunk drivers, distracted drivers, and even dogs not wearing seat belts in the car.

An otherwise quiet and calm school, church or movie theater gets shot up by a crazed, drugged-up gunman. The SOLUTION to the PROBLEM is GUN CONTROL.

A peaceful protest is infiltrated by actors hired by NWO agents through employment ads. Violence breaks out. Oh my, such a PROBLEM. How to stop “random” crimes that are, in fact, set up by 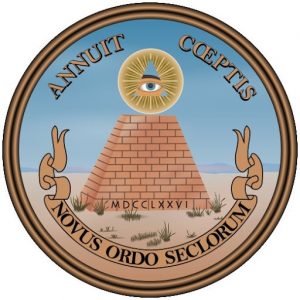 As InfoWar’s Paul Joseph Watson wrote in his 2003 book Order Out of Chaos:

“It works like this – the manipulating body covertly creates a problem and then directs the media to incessantly focus on it without recourse. The problem could be anything – a war, a financial collapse, a rash of child abductions, or a terrorist attack. The power of the media can create the false perception that a big problem exists, even if it doesn’t … Once you have created this problem you make sure that an individual, a group or an aspect of society is blamed. This then rallies the population behind the desperate lunge for a solution to the problem. ‘Something must be done!’ they cry in unison. The people that created the problem in the first place then come back in and offer the solution that the people demand. Remember – the people screaming for a solution do not know that the problem was artificially created in the first place. The solution to the problem is always a further curtailment of freedom and an advancement of one or more aspects of the New World Order agenda – whether that is geopolitical expansion, new laws or the implantation of new societal worldviews.”

Beware the Hegelian dialectic. When used by the wrong hands – and minds – it can be devilishly evil.