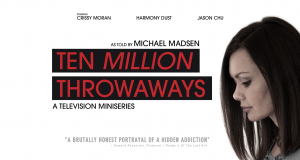 LOS ANGELES, CA (ANS) – From ex-adult stars and recovering sex addicts, to the leading US organizations that exist to combat the flow-on effects of the adult entertainment pandemic, a new documentary uncovers the illegal operating practices of this multi-billion dollar industry which continues to fuel human sex trafficking on American soil.

TEN MILLION THROWAWAYS tells the R-rated story of a handful of individuals on both sides of the camera.

All were involved in the adult film business and all were either sexually abused as children or exposed to graphic material at a young age.

Written and directed by Australian-born filmmaker Andrew Douglas, and shot on several continents, the documentary shines a light on the adult entertainment industry and its direct links to human sex trafficking, which generates $32 billion every year.

“In 2006, the revenue from the US adult entertainment business was over $13.3 billion, which is more than the NFL, NBA and major league baseball combined,” said ex-stripper Harmony Dust.

Musician Jason Chu said: “You know between cigarettes, weed, drugs, gambling and the adult entertainment biz – one of those is clearly the cheapest option.”

Howard Kazanjian, Producer, “Raider’s Of The Lost Ark,” called the docu-series, “A brutally honest portrayal of a hidden addiction.”

Written, Directed and Produced by Andrew Douglas TEN MILLION THROWAWAYS is a brutally honest portrayal of a hidden addiction.

MICHAEL MADSEN American actor Michael Madsen has made legendary contributions to cinema. With infamous roles in everything from Reservoir Dogs (Quentin Tarantino), Donnie Brasco (Johnny Depp) to Kill Bill: Vol 1 & 2 (Uma Thurman), Sin City (Bruce Willis) and The Hateful Eight (Samuel L. Jackson) he has made a lasting legacy on Hollywood. With a career spanning three decades, he is one of the world’s most recognizable names in filmed entertainment and will continue to be so long after his time. Madsen now lends his voice to TEN MILLION THROWAWAYS.

CRISSY MORAN Crissy Moran is a former pornographic actress. She began working in adult entertainment in 1999, and between 2001 and 2006 had performed in over 50 adult films. In 2006 Moran quit working in the adult industry. After retirement, she began speaking out and appearing in national media projects addressing the harms of pornography, human sex trafficking, and the sexual exploitation of women and children. Moran now travels domestically and internationally sharing her story.

MITCH SALMON Mitch Salmon is a former sex addict, and one of only two men that came forward to share personal stories of overcoming addiction. He does so in the hope that other men will find freedom from their shame and addiction also. Salmon believes that there are countless men from around the world who allow shame to keep them from ever speaking up about their own struggles, and the freedom that can be experienced by breaking the addiction.

JASON CHU Jason Chu is a hip hop artist based in Los Angeles, California. He is inspired to write and perform and is on a mission to speak hope and healing in a broken world. In his own words, “I believe in hope. Hope is not easy. We’re told, ‘set your sights lower, care less and watch out for yourself. Your dreams are too foolish. Your hopes too childish.’ But I believe it’s right to care, to give and to be moved by what we see around us. The doubtful merely lack faith.”

JAN VILLARUBIA Jan Villarubia is an ex-porn star who now shares her amazing story, having left the sex industry several years ago. She is a wife, mother and author who is determined to raise awareness about the dangers of the adult industry. In doing so, she has helped hundreds of women from falling into the same trap that once held her captive.

PATRICK TRUEMAN Patrick Trueman is the president of the National Center on Sexual Exploitation, based in Washington, DC. The American non-profit was established in New York in 1962 after grade-school children were found with hardcore pornography. The organization seeks to raise awareness about what they regard to be the harms of pornography and other obscenity to individuals, familes and society. Some of their recent campaigns include; The Safe Library Project and White Ribbon Against Pornography Week.

HARMONY DUST Harmony Dust is an American social activist for women who work, or previously worked in the sex industry. Dust was an exotic dancer until the age of 19 but quit the industry in 1998. She is also the founder and executive director of Treasures Ministries — an outreach and support group for trafficked women operating in the sex industry capital of the world — the San Fernando Valley, California.

Spearheaded by producer and founder Andrew Douglas, the company’s primary purpose is to see each project nurtured from initial concept, through production, marketing and distribution.

Andrew Douglas is the founder and director of White Shadow Films (WSF), and originally established the production company in 2012. Better known on the producing side of the business, Douglas recently wrote and directed the documentary event series Ten Million Throwaways narrated by Michael Madsen (Kill Bill, Reservoir Dogs, The Hateful Eight). He is responsible for steering the company into the future and is spearheading WSF’s current projects. Whilst at home he enjoys spending time with family and friends.

Having lived and worked in Hollywood his entire life, Howard Kazanjian has over 40 years experience in the entertainment industry. He was VP Production at Lucasfilm for seven years and then served as VP Production at Universal Pictures. He is best known for producing Raider’s of the Lost Ark as well as Star Wars: Return of the Jedi. Kazanjian plays a key supervisory role in positioning the company’s projects in the marketplace for favorable foreign and domestic distribution deals.