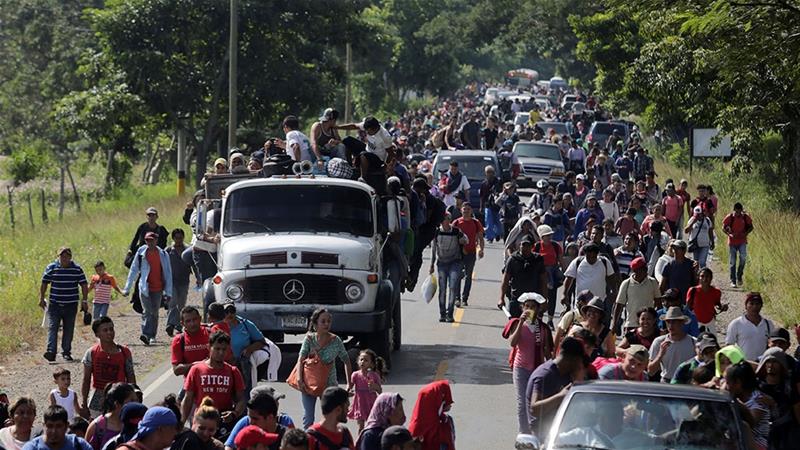 (OneNewsNow.com) – As approximately 14,000 migrants approach the United States in the caravan originating in Honduras, more and more gang members and Middle Easterners are joining the pack, and watchdogs are now saying there is “evidence” that the mass illegal migration is being funded by Americans.

With the timing perfectly situated right before November’s midterm elections to give pro-immigration activists more incentive to vote for Democrats in major House and Senate battles across America, proof is now being uncovered showing that the migrant caravan headed north was financially motivated by Americans – and not by a spontaneous urge of thousands to simultaneously rush the U.S. border out of desperation for a better life.

Judicial Watch President Tom Fitton – who heads his government watchdog group that has a team in Guatemala looking into the suspicious illegal migration – is calling on President Donald Trump to launch a criminal investigation to find the American roots of the mass exodus that originated in Honduras.

“President Trump should order criminal investigation of how the ‘caravans’ have been organized and financed,” Fitton tweeted Tuesday. “Based on our team’s reporting from Guatemala, it is likely Americans involved.”

It now appears that the thousands of illegal invaders trekking toward the southern border of the U.S. were staged by Democrats – and extensively covered by the mainstream media – to give the blue party traction with pro-immigration voters when they cast their ballots in the weeks to come.

“The fake news media claims impoverished women and children are walking thousands of miles from Honduras to the United States in search of a better life, [but] the reality is the majority of the ‘caravan’ is military-aged virile males; the women and children are being used as media props and human shields,” the Gateway Pundit reported. “Trucks are actually giving the migrants rides towards the border to help them reach the U.S. just in time for the midterms.”

Not originating from a humanitarian crisis after all?

“There are individuals within the caravan who are gang members or have significant criminal histories,” Houlton stated on Tuesday, according to WND. “Citizens of countries outside Central America – including countries in the Middle East, Africa, South Asia and elsewhere – are currently traveling through Mexico toward the U.S.”

Embedded in Judicial Watch’s team on location in Guatemala, investigative reporter Sara Carter stressed how numerous migrants in the caravan have been given scripted answers to questions about who organized the massive caravan.

“Mostly men now crossing the #Guatamalen border – rehearsed answer, ‘This is not politics – this is about poverty,’” Carter tweeted Monday. “There were women and children, but they were at the front of the caravan (smaller numbers). None would say who the organizers are, but several said it was organized.”

She spoke with the head of Guatemala’s defense department the next day, who indicated that the American-bound migration was spearheaded by leftist organizations north of the border.

“Met with the Guatemalan Minister of Defense Luis Miguel Ralda Moreno,” Carter tweeted Tuesday. “Based on the interviews I’ve conducted so far – along w/ @JudicialWatch investigations – the U.S. needs to investigate the funding that was used by NGOs, as well as other groups to organize the caravans.”

Not your typical humanitarian crisis scenario

The government watchdog group was confident that the demographics of those in the caravan give little indication that it is an exodus to escape a humanitarian crisis.

“[Besides] gang members and mobs of young angry men, [the caravan also consists of Africans, Bangladeshis, Sri Lankans and Indians],” Judicial Watch stated Tuesday, according to WND. “[Our team embedded within the caravan has observed that] the popular mainstream media narrative of desperate migrants – many of them women and children – seeking a better life is hardly accurate. [There are] large groups of men – some with criminal histories – aggressively demanding that the U.S. take them in.”

The suspicious mixture of northbound migrants does not corroborate with the canned false narrative given by many participants that they are merely seeking political asylum in the U.S.

“Asylum seekers are required to demonstrate they have a reasonable fear of future persecution on account of race, religion, national origin, political opinion or membership in a social group,” WND’s Art Moore explained.

“Guatemalan intelligence officials, according to Judicial Watch, confirmed that the caravan that originated in the northern Honduran city of San Pedro Sula includes Special Interest Aliens, or SIA, from other continents as well as other criminal elements and gang members.”

Even though it has been contended that the destitute and afflicted got together to start the movement, many who claim to be fleeing from poverty and gang violence in the group said that they found out about the caravan on social media.

“Although the caravan’s origin story remains somewhat opaque, the answer from many migrants here is that they had wanted to leave for months or years, and then – in a Facebook post, a television program, a WhatsApp group – they saw an image of the growing group and decided,” The San Antonio Express-News reported.

One migrant from Santa Ana, El Salvador, said she saw pictures of the caravan on television, which led her to purchase a bus ticket to join the group last week in Guatemala.

“Right away, I knew I would go,” 37-year-old Irma Rosales told the Express-News.

Honduran 30-year-old Ediberto Fuentes said that he was stranded for months after fleeing for southern Mexico because he did not have enough money to pay a smuggler to get him across the U.S. border.

“I had been waiting for a way to get north, and then I heard about the caravan,” Fuentes shared, according to the San Antonio daily. 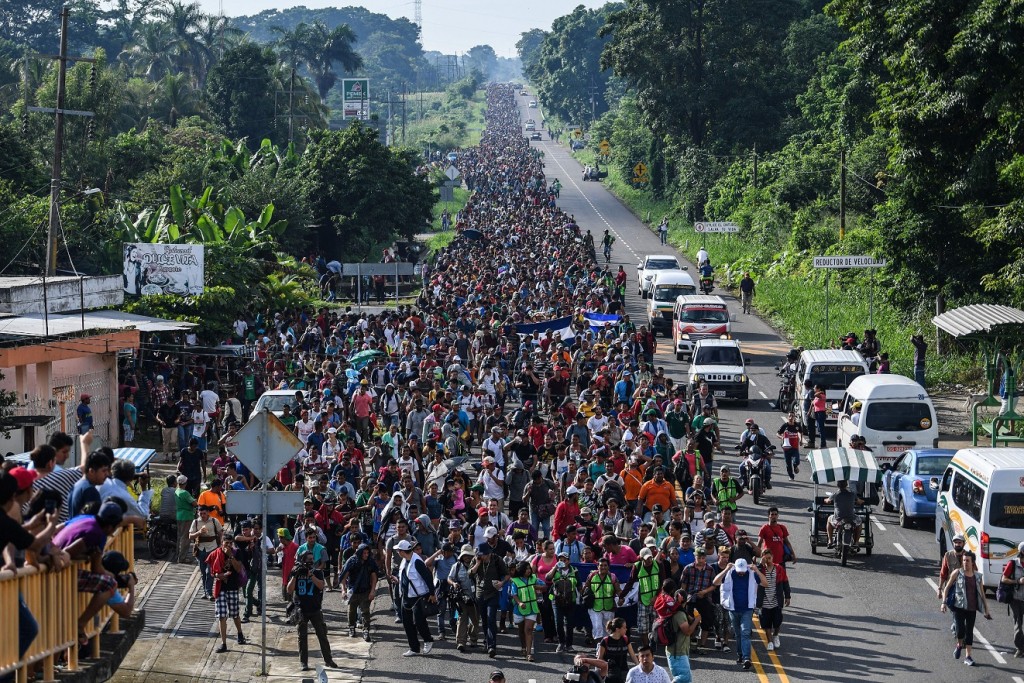 When addressing the origins of the mass migration, Tijuana-based Pueblos Sin Fronteras Director Irineo Mujica – a pro-immigration activists who promoted the current and previous caravans and assisted in mapping the routes and other logistics – insisted that the mass migration from Honduras is not a politically organized movement.

“Everyone wants to know who is guilty, who is behind this,” Mujica pointed out, according to the Express-News. “But no one has the power to organize this many people. No one can engineer an exodus.”

“[Social media and news media coverage] prompted an explosion in the number of migrants,” the Texas paper divulged. “Within days of the caravan’s departure from San Pedro Sula on Oct. 13, almost no one could pin down the group’s official origin story. They could cite only the Facebook post or television program that led to their own decision to migrate.”

Ruffians on their way to U.S.

At Chiquimula, Guatemala – just 35 miles from Honduras – Judicial Watch reported coming across approximately 600 men in what was described as a “rowdy group” between the ages of 17 and 40 marching down a highway leading north, complete with a previously deported 40-year-old Honduran who lived in the U.S. for decades and another insisting that he will get employed once he reaches the U.S.

“We’re going to the United States to get jobs,” a 30-year-old migrant proclaimed, according to WND.

Other migrants raised their voices in defiance to Trump’s tough-on-immigration agenda.

A 29-year-old traveling with his 21-year-old brother declared he was going to the U.S. for two reasons.

“We need money and food,” he asserted, according to WND.

Every migrant interviewed by Judicial Watch gave the group the exact same “rehearsed line” that the caravan was not about politics, but poverty.

“[Interviewees insisted that the migration came about spontaneously], even though there were clearly organizers shouting instructions in Spanish and putting select persons in front of cameras for interviews,” the watchdog group revealed, according to WND.

The conservative Honduran President Juan Orlando Hernández contended that migrants are being manipulated by the left to destabilize his country, and Vice President Mike Pence told The Washington Post that the Honduran leader revealed to him that Venezuela’s left-wing government was financing the caravan.

It was argued by Hernandez that women and children are being exploited in the caravan by leftists who have no regard for their safety and well-being.

“The irregular mobilization was organized for political reasons to negatively affect the governance and image of Honduras and to destabilize the peace of neighboring countries,” Hernandez explained before noting that many who participated in the caravan returned to Honduras after they found out that they had been duped, according to WND.

Various waves have been sent out in the caravan – some with success, and others with failure.

“Guatemalan officials said 1,700 migrants have been returned to Honduras on buses,” Moore informed. “Government sources said first wave of migrants totaled about 4,000. A second, less organized, group of about 2,000 then set out for the U.S.”

According to Guatemalan Secretary of Strategic Intelligence Mario Duarte, his nation is seeking assistance to end the human caravans, which are robbing Guatemalans and committing crimes throughout the country.

“There are only so many resources we can dedicate to this,” Duarte lamented, according to WND.