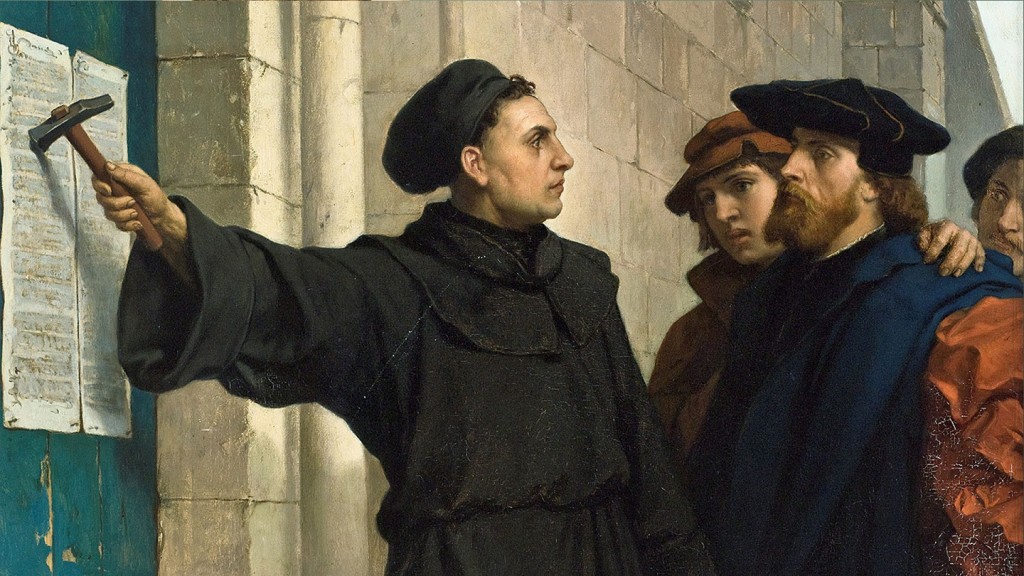 By Rick Marschall
SWARTZ CREEK, MI (ANS) – This October 31st marks the 500th Anniversary of the Protestant Reformation, commemorating the traditional date of October 31, 1517 when the Augustinian monk Martin Luther nailed 95 theses — point-by-point criticisms of contemporary Roman Catholic practices — onto the wooden door of Wittenberg Cathedral in Germany. All throughout northern Europe, churches were the centers of each town’s social, as well as spiritual, life, and their doors were the precursors of our day’s “postings to your wall.”

Everyone in the town square saw Luther’s manifesto. It was not startling except, perhaps, for its formality and audacity. But Luther had been complaining about practices in the Church for some time: corruption in its operation, committing errors in doctrine. And so had many others complained in other German cities and states. And in Switzerland. And the Netherlands. In northern Italy. Even a hundred years earlier, when a dissident Moravian priest, Jan Hus, was burned at the stake. I have stood in reverence before his statue in Prague’s Old Town Square. And even before Hus, one who protested the ethical and doctrinal corruption in Rome: John Wycliffe, of England. One of his “crimes” was translating the Bible into English (the “language of the people,” instead of Latin), as Luther later dared to do with his German translation.

For all the brewing opposition to the Vatican, the Reformation, if not Reformed theology, is popularly regarded as having begun with Luther, and specifically on that day in 1517 when he nailed those 95 indictments to the church door. That is because a dam burst, metaphorically, in the Catholic Church, in larger Christendom, in society, in politics, in the arts, on all cultural levels. Half the German princes opposed the Pope’s political and military prerogatives, as well as papal ecclesiastical authority. After Hus’s martyrdom, major social upheavals led to Bohemia soon becoming 90 per cent Hussite (today’s Moravian church) or other variety of Protestant.

So the 95 Theses were the spark that lit a bonfire, but there were burning embers and brushfires aplenty for two centuries previous. Also, the times were right for a revolution like the Reformation. Rome’s corruption was outrageous; extra-biblical doctrines were offending the pious; and, hand-in-hand with the ideas behind the Renaissance, men were learning to think for themselves. And act for themselves; and organize, and trade, and read, for themselves. Literacy: a few centuries earlier, Luther’s manifesto would have been a paper with meaningless scribbles to passersby. On that Sunday, however, the theses were read, and devoured, and discussed. The Pope was furious when he was told that Luther’s tracts were best-sellers of the day in Germany.

It is frankly the case that the revolution that Luther sparked was not fully intended by him. He did not want to break away from the Catholic Church, least of all have a denomination named for him. He scolded his followers who stormed Catholic churches and knocked over statues (“idols,” to them). But… he was excommunicated. For a time he was hidden by protectors because the Church wanted him dead. He married a former nun, settled into a life of preaching and writing (many volumes!) and preaching “sola Scriptura” (Scripture Alone) as the basis for faith, and for salvation.

His era’s handmaidens, Renaissance thought, humanism, and neo-Classicism, were not particularly welcome movements to Martin Luther. If anything he was closer to Orthodoxy, at least in rejecting “modern” trends in theology. He went so far as to say that “Reason is the enemy of Faith.” Remember, he relied on “Scripture Alone.” Ironically, he was especially venerated during the Enlightenment because (despite some history books claiming the period to be one of liberation from the Bible) Newton and others saw scientific discoveries as explaining God, not marginalizing Him. So Luther, father of the Reformation, was not the first of the Moderns, but the last of the Medievalists.

In spite of Luther — or, rather, an inevitable component of the Protestant Reformation — social and political freedoms were unleashed. Literacy spread, and as people split from the church they increasingly asserted their civil rights too. In a very real sense, we can say for convenience’s sake if not dramatic effect, that Western civilization was one way before Oct 31, 1517; and another way afterward. With Martin Luther, formally, on that day, began the battle of the individual against authority, the primacy of conscience over arbitrary regulations.

Those battles continue, of course. But blessings flowered… and malignant seeds sprouted too. Democracy has led to social disruption and near-anarchic relations between classes and nations. With broken ecclesiastic authority, public morality has degenerated. And as denominations have multiplied, their influence has virtually evaporated in Western culture and in the United States.

It can be said — and has been said, frequently — that the Roman Catholic Church brought the Reformation onto itself. Perhaps (for instance) some of the mistresses and illegitimate children of Popes would have a say in that discussion. The widespread device of selling “indulgences” still stands as a major offense: common people were persuaded to pay money to guarantee that their dead ancestors would be delivered from torture in Purgatory (despite the fact the Bible does not say that we can have influence of the souls of the departed. or even that there is such a place as Purgatory). Yet an enterprising priest, Tetzel, invented a rhyme, “When a coin in the coffer rings, a soul from Purgatory springs.” Much of this was a scheme to build and decorate St Peter’s in Rome. Clever venture capitalism, bold entrepreneurial management, perhaps; but rotten theology. 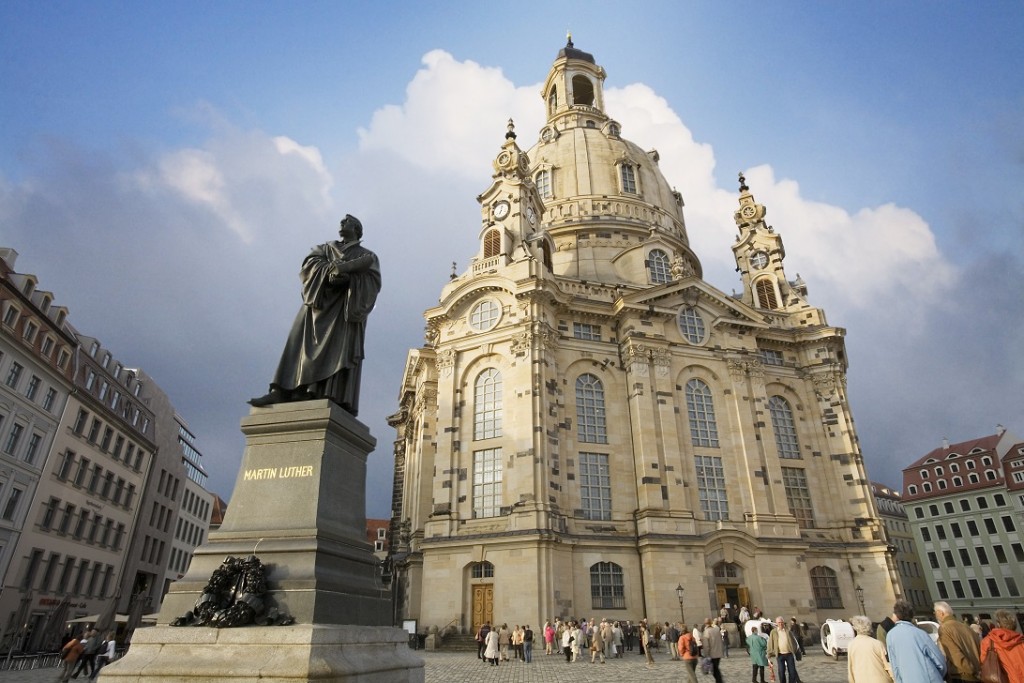 Statue of Martin Luther, in fron of the Marienkirche. Dresden, Germany

Very specifically, these vile offenses confronted Luther when he travelled on foot from Germany to the Holy See on a mission. He was aghast at the corruption, decadence, sin, money-grubbing, and countless heresies — not in the city of Rome, but in the Vatican itself. A biographer of Luther wrote, “the city, which he had greeted [from afar] as holy, was a sink of iniquity; it’s very priests were openly infidel and scoffed at the services they performed; the papal courtiers were men of the most shameless lives.”

Let me fast-forward 500 years, and let us ourselves enter the Holy See of Protestantism (as it were) and assess what Reform has brought to the Church of Jesus Christ, those portions of the Body.

Do we see denominations inventing and “discovering” their own doctrines? Do we see churches bending their theology in order to fill the pews? Do we see widespread moral failings in the clergy — everything from pedophilia to homosexual encounters? Do we see story after story in the news about financial shenanigans? How many churches wallow in obscene opulence, as the poor live in their shadows? How many charities are shams; how many mission outreaches, we learn with sad hearts, are looted? How often are “modern” sins excused by the heretical lies of relativism in the church? How have seminaries become breeding-grounds of Progressivism; why are entire denominations denying the divinity of Christ, the existence of Absolute Truth? What is this extra-biblical “Prosperity Gospel”? — when preachers procure “seed-faith” offerings, and offer “prayer hankies” to customers who are assured of God’s blessings — HOW is that different from selling indulgences?

Racing through that list, you will recognize problems that are endemic to this or that denomination; sometimes still the Catholic church; mainstream or evangelical Protestants; Pentecostal or post-modern; “Seeker” or emergent. I believe that the Christian churches of contemporary Europe and America might grieve the Heart of God no less than the corrupt Church of the Popes 500 years ago.

We need a New Reformation. We need “Scripture Alone” as our guide again. We need Holy indignation from the remnant of faithful followers of Jesus Christ.

We need to compose a New 95 Theses (knowing that a list of problems with today’s churches could be a larger number!). I intend to write some myself, as I compose this, but as I look for hammer and nails to post them, or publish them, I invite readers to nominate some of the practices in today’s churches that need reforming. We ARE Christ’s representatives here on earth; and a royal priesthood of believers. We have a responsibility. And let us be guided by Martin Luther, in one of the greatest moments of human history. Hauled before a court of the Holy Roman Empire, condemned by the Pope himself, threatened with excommunication and death, ordered to renounce his thoughts and denounce his books and sermons… nevertheless he was defiant in opposition: “Here I stand. I can do no other. God help me.”

A mighty fortress is our God.