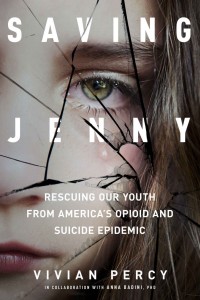 NEW YORK – For 14-year old Jenny, being struck and thrown 20′ by a taxicab in downtown Manhattan resulted in an array of injuries, both physical and psychological, and was a serious-enough blow to she and her widowed mother — but then the real nightmare ensued as Jenny became addicted to the painkillers prescribed to her by her physician, imploding the world of this small family of two.

After enduring years of the aftermath which included a descent into despair as treatment facility after treatment facility were sought out by her increasingly frantic mom, “Vivian Percy” (a nom de plume used to protect the identity of her daughter), finally had enough when she “grew tired of attending the funerals of my daughter’s friends” and decided to chronicle their multi-year ordeal. Saving Jenny — Rescuing Our Youth from America’s Opioid and Suicide Epidemic (June, Radius Book Group, 320 pages) painstakingly chronicles the horrors visited upon her increasingly fragile daughter as she endured myriad abuses inside the recovery arena charged with helping those battling addictions.

Unmasking revelation after revelation about the illicit and even illegal activities at rehab treatment centers, “Vivian,” an attorney with a global law firm headquartered in Manhattan, also forcefully addresses the interwoven issues stemming from Big Pharma as well as the insurance industry — with all three’s emphasis on profits over patient care. Beginning this journey as a self-described agnostic, she also shares how she and Jenny as well each found their ultimate redemption by turning to the Lord. As a result, the book unmasks the sometimes dark underbelly of addiction treatment while ultimately revealing hope-filled strategies and insights to tangibly and spiritually address this widespread crisis in our country…and beyond.

Dr. David A. Watson, Senior Pastor of Calvary Chapel in Staten Island says of this new title, “In this thought-provoking work, Vivian Percy is challenging us to . . . urgently embrace a new paradigm to save our teens and young adults from the opioid and suicide epidemic. Percy not only shares her and Jenny’s story, she also weaves throughout it practical solutions to be seriously considered by all. This well- researched and very personal treatise should be required reading for leaders in every strata of our society.”

Also formerly an agnostic before he too became addicted to opioids, David Stoecker, LCSW, Education & Advocacy Outreach Coordinator for the Missouri Recovery Network concurred, saying, “My life is dedicated to reaching and helping restore others who are struggling with addiction. I applaud Saving Jenny in revealing some of the traps those attempting to recover unwittingly fall into, and I’m especially encouraged to see that Vivian and her daughter similarly embraced God’s grace, the most potent ‘recovery tool’ of all.”

Anna Badini, LCSW, PhD collaborated on Saving Jenny to insure the accuracy of descriptions of therapeutic practices within psychiatric/rehab institutions and the flaws in the current mental/health substance abuse model. She earned her doctorate from NYU’s program in Clinical Social Work and has been in practice for 20 years, 10 of which as a Psychotherapist and Supervisor at a Child Guidance Center and part of a Sexual Abuse Investigative Team.

Today, although Jenny’s still dealing with post-addiction challenges, overall her story is one of deliverance, personal transformation and, with God’s help, new life found.