(NaturalNews) The U.S. military has been experiencing its highest-ever suicide rates for the past several years, and a new documentary film lays out shocking evidence that the Pentagon’s reliance on psychotropic antidepressants is feeding the epidemic.

The film, The Hidden Enemy: Inside Psychiatry’s Covert Agenda, produced by the Citizens Commission on Human Rights (CCHR), details psychiatry’s rise in the military, from World Wars I and II to its prominence today, laying bare a sinister conspiracy to use men and women in uniform as nothing more than guinea pigs.

Early in 2013, on the official website of the U.S. Defense Department, officials announced a startling statistic: The number of military suicides in 2012 had far exceeded the total number of personnel killed in action, or an average of nearly one per day.

A month later, an even more startling — and sobering — figure was released by the Department of Veterans Affairs: Veteran suicide was running at about 22 per day, or around 8,000 a year.

The figures were so dire that the U.S. Secretary of Defense labeled suicide in the military an “epidemic.”

There have been some who are claiming that the dramatic uptick in military suicide rates are due to the stresses of war — and indeed, with no draft, many of the same personnel, over the course of several years, have been forced to deploy to Iraq, Afghanistan or both, many times. But in digging further, investigators discovered that around 85 percent of military suicides had never seen combat; 52 percent had never even deployed to a war zone.

These figures begged the question, then: What unsuspecting factor was leading to so many military suicides?

The new documentary explains: All the evidence points in one direction — the soaring rates of psychiatric drugs that have been prescribed, mostly by military psychiatric personnel, since 2003.

“Known medication side effects of these drugs such as increased aggression and suicidal thinking are reflected in similar uptrends in the rates of military domestic violence, child abuse and sex crimes, as well as self-harm,” said CCHR on its website announcing the documentary.

What’s more, military psychiatrists have created ever-widening definitions of what it means to be “mentally ill,” especially when it comes to post-traumatic stress disorder, or PTSD, in troops and veterans. When such diagnoses are made, they are almost inevitably followed by at least one prescription of a psychotropic, antidepressant drug.

Troops need to become educated to the dangers of psych drugs

The really sinister part is this: Psychiatrists are aware that these drugs really don’t cure anything; rather, they simply mask symptoms. They 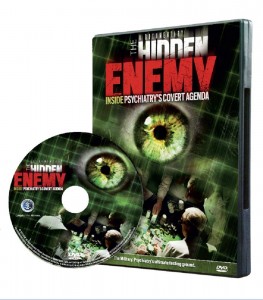 are also very well aware of the many dangerous side effects of said drugs, including addiction. But they nevertheless claim that the risks of medicating troops are exceeded by the drug’s supposed benefits. Meanwhile, troops’ real health problems are going unaddressed, and health therefore deteriorates.

“In the face of these grim military suicide statistics, more and more money is being lavished on psychiatry: the U.S. Pentagon now spends $2 billion a year on mental health alone,” CCHR said. “The Veterans Administration’s mental health budget has skyrocketed from less than $3 billion in 2007 to nearly $7 billion in 2014–all while conditions continue to worsen.”

The documentary unveils the entire situation in very stark terms, as it urges vets and soldiers to become more educated on the very real
dangers of psychiatry and psychiatric drugs. Their answers lie in full and honest informed consent, the documentary’s producers say, in addition to exercising their right to refuse treatment.

“Our service members need to know there are safe and effective non-psychiatric solutions to the horrors of combat stress, and that these solutions will not subject them to dangerous and toxic treatments that will only send their health spiraling downward,” the human rights group said.