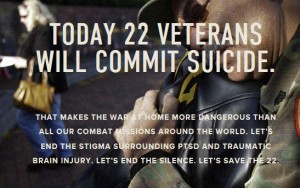 The immunological injuries suffered by Vietnam Vets are still being covered up or ignored. There is a tiny breakthrough however in a recent analysis showing that: Vietnam War Vets Still Plagued By PTSD: Findings Underscore Need For Long-Term Mental Health Services. PTSD stands for Post-Traumatic Stress Disorder.

By immunological injuries I’m referring to the assault on military personal by dozens of vaccinations with mercury preservatives, a mouthful of mercury fillings, horrible diet, and depletion of minerals due to rigorous, extremely stressful training and combat missions, and exposure to Agent Orange. PTSD is the code word for all of the above. And until military doctors acknowledge all of the above, Vets from any theatre of war will continue to be mistreated. The same factors are evident in Middle East combatants except you can replace the Agent Orange with depleted uranium.

The survey shows that “A small, but significant, portion of Vietnam War veterans still experience symptoms of post-traumatic stress disorder (PTSD) even 40 years after the war ended.”

I’m sure the numbers are downplayed – but even so, 11% or about 271,000 male veterans report current clinical and war-zone PTSD symptoms. More than a third of all veterans with PTSD directly related to the war also experienced major depression.

Researchers were surprised at the persistence of symptoms for veterans over the course of time. But if you are suffering from heavy metal poisoning, adrenal depression and severe mineral deficiency – psychological therapy is never going to help.

I was alerted to veteran’s chronic health problems when looking into mineral depletion and I learned that soldiers in the Middle East found that the sweat from their shirts was so loaded with minerals that they would dry like cardboard. Their hydration of choice and electrolyte replacement was Gatorade loaded with sodium and 28 grams of sugar per 16 ounces. That’s 7 tsp of sugar. At any one time, your blood stream contains only about 2 tsp of sugar. Seven tsp is a huge shock to your system and ultimately leads to diabetes.

What does this study recommend? Psychotherapy and medication with no attention at all to toxicity and nutrient depletion. The lack of proper treatment has led many Vets to self-medicate with alcohol and drugs, and who can blame them?

Over the years I’ve been approached many times to become involved with treatment protocols for Vets and for 911 first-response workers. Each time, good intentions bog down in bureaucracy and competition with allopathetic medicine and NOTHING ever happens. The only way we can help Vets is by doing it one-on-one, ourselves.