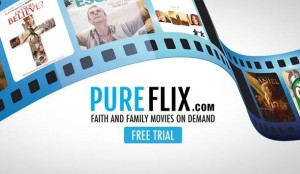 SCOTTSDALE, Ariz – PureFlix.com, the leader in faith and family-friendly streamed entertainment, is expanding its roster of original content with the addition of the industry’s first Christian sitcom, soap opera and more.

After launching the sitcom “Hitting The Breaks” last month, the company will follow that up this fall with “Hilton Head Island”, a soap opera featuring several well-known stars, and a comedic series, “Malibu Dan”. All will debut as PureFlix Original Series.

“There’s a clearly an appetite for original content in the streaming video world and we decided it was a hunger we needed to feed,” said Greg Gudorf (photo), CEO of PureFlix.com. “Our efforts paid off; Our growing subscriber base gravitates toward original series that are new, fresh and can only be seen on our platform.”

It’s a sitcom about a former racecar driver who relocates his family to Colorado to run a country inn in a town full of colorful characters. Tim Tebow, Rob Schneider and Carrot Top all make guest appearances. Each of the 10 episodes concludes with a prayer provided by award-winning actor Burt Reynolds.

The first Christian soap opera from PureFlix.com debuts this fall. “Hilton Head Island” is currently in production and features such stars as Antonio Sabato Jr., Donna Mills, and Wink Martindale in a 22-episode family-focused dramatic series.

That will be followed by “Malibu Dan” (also starring David A.R. White), a 12-episode comedic series about a co-host of morning talk show in Malibu, Calif, who struggles to find a balance between work and his home life.

Since mid-2015, the streaming video on demand (SVOD) service has added seven original series, beginning with “The Encounter” series, which was lauded by PureFlix.com subscribers for its depiction of Jesus (played by Bruce Marchiano) helping people in everyday situations. Other successful originals include the “Pure Flix Comedy All-Stars”, “After The Encounter” and “Pure Talk”, a talk show covering Christian issues and trends.

“The popularity and success of ‘The Encounter’ series was the driving force for us to expand our original content lineup,” said Gudorf. “It gave us the confidence to keep on developing new original series and programs.”