Vladimir Putin: Last year there was one extradition case by the United States… Mueller can use this treaty as an official request to us… in this case this kind of effort should be a reciprical one… For instance we can bring up Mr. Browder… They sent a huge amount of money $400,000,000 to Hillary Clinton!

Putin offered permitting officials in the US, including Mueller, to Russia to assist in their investigation of the supposed Trump-Russia collusion story. Then Putin dropped his bomb where the US could reciprocate Russia in one of their investigations –

For instance, we can bring up Mr. Browder, in this particular case.  Business associates of Mr. Browder have earned over $1.5 billion in Russia and never paid any taxes neither in Russia or the United States and yet the money escaped the country. They were transferred to the United States. They sent [a] huge amount of money, $400,000,000, as a contribution to the campaign of Hillary Clinton.  Well that’s their personal case.  It might have been legal, the contribution itself but the way the money was earned was illegal. So we have solid reason to believe that some [US] intelligence officers accompanied and guided these transactions. So we have an interest in questioning them. 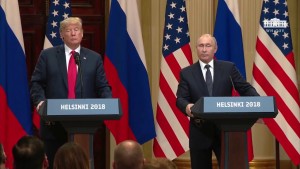 MORE on Bill Browder… Browder is an American-born British financier. He is the CEO and co-founder of Hermitage Capital Management, an investment fund that at one time was the largest foreign portfolio investor in Russia.

Bill Browder’s grandfather was head of the Communist Party USA. The Russian government put Browder on the Interpol most wanted list in 2017.

Browder appeared before the Senate Judiciary Committee, where he testified that Prevezon “hired Glenn Simpson of the firm Fusion GPS to conduct a smear campaign against me and Sergei Magnitsky. . . . He contacted a number of major newspapers and other publications to spread false information that Sergei Magnitsky was not murdered, was not a whistleblower and was instead a criminal.” As a former Wall Street Journal reporter, Simpson had extensive contacts with his former media colleagues he could use to spread anti-Magnitsky propaganda.

Browder alleged that “Glenn Simpson was trying, on behalf of the Putin regime, to cover up the murder of Sergei Magnitsky, knowingly lying to journalists in Washington to write false stories. . . . Natalia Veselnitskaya hired him to lie, and Natalia Veselnitskaya was working for Putin. So it’s pretty clear to me that this was a major Putin operation.” (In a statement, Fusion GPS counsel Joshua Levy strongly denied Browder’s claims: “William Browder has an ax to grind with Fusion GPS. His retaliatory attacks on the company are not supported by a shred of evidence. His latest claim that Fusion GPS was hired by the Kremlin to cover up the murder of Sergei Magnitsky — five years after it occurred — is untrue and defamatory. His death was a tragedy, and no one at Fusion GPS has ever said anything to the contrary.”)

Earlier this year, Browder filed a complaint with the Justice Department accusing Fusion GPS and others involved in the anti-Magnitsky campaign of unlawfully lobbying on behalf of Russian interests in violation of the Foreign Agents Registration Act. In a letter to the department, Senate Judiciary Committee Chairman Charles E. Grassley (R-Iowa) wrote, “The issue is of particular concern to the Committee given that when Fusion GPS reportedly was acting as an unregistered agent of Russian interests, it appears to have been simultaneously overseeing the creation of the unsubstantiated dossier of allegations of a conspiracy between the Trump campaign and the Russians.”

Here’s the bottom line: We have congressional testimony, under oath, that Clinton hired the same firm to smear Trump that Putin reportedly used to smear Magnitsky. Moreover, we also know that the Fusion GPS dossier relied on senior Russian government officials for much of the dirt it compiled, including “a senior Russian Foreign Ministry figure” and a “former top level intelligence officer still active in the Kremlin.” Together, those are bombshell revelations.

Yet today, there is barely a peep in the mainstream media about the Clinton-Fusion-Putin connection.