(CBN News) – In the NFL, the Washington Redskins lead their division after beating the New York Giants recently 20 to 14. The team’s surprising success is partially due to Kirk Cousins.

The quarterback spent the early part of his career behind Robert Griffin III. But after RG3’s lackluster performance and a series of injuries, Cousins became the starter. He says his role as both a servant and a leader is all part of God’s plan.

Cousins was surprised when he heard the Washington Redskins selected him in the 4th round of the 2012 NFL draft. He was stunned because the team had already selected a quarterback in the first round in Robert Griffin III. 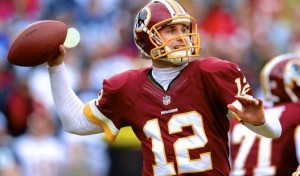 “The most interesting thing was that the Washington Redskins were nowhere on my radar especially after they traded up for Robert,” he recalled. “I felt like Robert was going to be going there and they’d be set.”

Now that the shock factor of the situation has worn off, his role with the team is becoming clearer. “The fact that I’m here and that this is where my future’s going to be for now is a very unique thing and I think it shows God’s hand on the process,” he told CBN News.

Cousins grew up a preacher’s kid in Holland, Michigan, three hours west of Detroit. “I feel like the parents that I had and the way that they raised me, I feel very fortunate,” he said.

Growing up hearing the Word of God, he accepted Christ at a young age. “While I accepted Christ as my Lord and Savior at the age of 7 or 8 years old, I think when it really took root in me and when I really took ownership, was when I moved into high school and really started to learn what it meant to not just be calling myself a Christian but to actually be a follower of Jesus Christ,” Cousins said.

At Holland Christian High School, he also had the opportunity to visit Israel, which helped strengthen his faith. “I was able to go all around Israel from Jerusalem to the Sinai Peninsula as well as up to Galilee and to see where Jesus walked so it was a very, very unique experience,” he shared. “(It’s) a once in a lifetime experience and it had a major impact on my ability to take ownership of my faith.”

High school is also where he excelled as an athlete in football, basketball, and baseball. Despite his success, many college recruits looked the other way. “I watched many other quarterbacks, including quarterbacks from my area, getting scholarships and couldn’t understand why I wasn’t getting any but trusted that God had a plan and had the right place for me,” Cousins said.

This setback was partially because of an injury that kept him on the sidelines for part of the season. “I think that God had His hand in that entire plan because when I broke my ankle my junior year, it really hurt my recruitment,” Cousins told CBN. 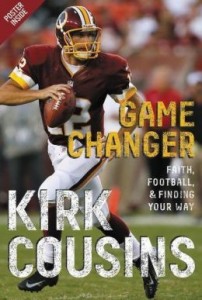 “And I remember commenting to my dad on the way home from the doctor’s office after finding out that my ankle was for sure broken and that I would miss several weeks of football,” he continued. “I told him that this means I can’t play college football because my chance to get recruited is done. My dad said ‘Well, you don’t know that. We’ll see what happens,'” he recalled.

Before leading Michigan State to a Big 10 championship, he spent his first two years as a backup; a story similar to his career with the Redskins. “The fact that I basically ruled out that opportunity and yet here I am and that I was able to play at Michigan State, just shows how God is bigger than our setbacks and bigger than our trials,” Cousins said.

While in Washington, wondering if he would find a spot as the starter, he leaned on those past experiences. “A broken ankle, or a setback here or there, isn’t going to get in the way of God’s plan,” he explained. “At the end of the day, much like my college decision, when you know that God has His hand in it and that He has a plan, it takes much of my worry and much of my doubts.

“It takes them away because I trust that He brought me here for a reason,” he concluded. Part of that reason was to lead the Redskins to the playoffs for the first time since 2012. But Cousins sees himself as more than just a leader on the football field.

“I do think naturally I am a leader. I believe that leadership at the end of the day is influence,” he explained. “And I think that more than anything as a Christian I want to be able to influence my teammates for Christ and that’s not going to change.”

Each day, Cousins works the best he can for the glory of God, seeing every triumph and every trial as part of God’s plan. “You know I think of Colossians 3:23 where it says whatever you do, do it with all your heart as for working for the Lord, not for men,” he said. “So the fact that Jesus Christ has died for me and my life is in Him—while football is important to me, it’s a game. And it doesn’t determine my identity; it doesn’t determine my value as a person. That’s tied up in Jesus Christ and He’s not changing any time soon.”

“So I take great comfort in that fact,” Cousins added. “And honestly I don’t know if I could make it to this point without my relationship and my faith in Jesus Christ because I believe it’s that hope that faith that confidence that He’s given me and His Word gives me that I believe has helped me through many tough times to get to this place.”