Racism does not exist 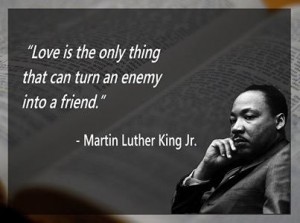 It’s typical of liberals to misdiagnose a problem and then come up with a false solution. Children of the lie live in darkness, yet they judge others and prescribe complicated answers that do more harm than good. “Racism” is a perfect example.

Look at the division in the country. We’ve had eight years of a “social justice” president and liberal media churning out fake stories of “racism.” Under a pretense of “open dialogue,” they stirred up a series of black riots under the first black president while lionizing dead thugs and their bad parents. They hamstrung the police, and violence and murder increased in black communities around the country.

Meanwhile, the politically correct RINO Republican establishment and morally weak Christians around the country failed to speak out.

I’ve been speaking around the country for 27 years to all races and ages, male and female. Wherever I go, all share the same root problem – it’s not “racism,” but much closer to home. It’s self-righteous judgment – which is anger.

If you have any anger within, you love no one. You can’t love your family if you hate your enemy (or vice versa). All hateful people show favoritism and discriminate unjustly, yet they think their anger is justified.

Most blacks hate whites. But they are not “racist.” Rather, they hate whites because they are hateful people. They received no real love from their parents, and they believed a lie (that whites are “racist”) to justify their own hatred.

I believe Barack Obama’s mother hated her mother. His white grandmother had a negative experience with a black person. She would speak of blacks in a way that seemed “racist” to young brainwashed Barack. In reality, she was traumatized.

On my radio show, I interviewed a black man in Seattle teaching preschoolers about “racism.” As a boy, he saw blacks beating up whites in the Rodney King L.A. riots. Seeing this, he said, “I don’t want to be black.” His mother taught him that black anger was due to white “racism.” Now he misleads other children.

People think they should hate “racism.” Rather, they should overcome the evil of their own anger. Accusing others of “racism” is like the judgmental man with a plank in his own eye thinking he sees a speck in his brother’s eye.

Those who are not open to the truth display the anger I’m talking about. They make up excuses and lies; they refuse to answer questions directly.

Those who are open can see that the anger within them is wrong. I recently talked with a middle-aged white woman and a young black man – both related to my message in their deep need to forgive.

The black man was originally from Baltimore. His mother taught him about “racism.” He grew up watching slavery movies. He accompanied “friends” to rob and attack whites and Hispanics who they thought were “racist.” He realized anger was the primary issue facing blacks and all people – a lack of love.