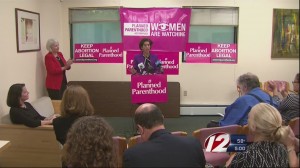 Raimondo claimed that she would sign a ban on late-term abortions as long as there are provisions for the life and for the health of the woman. “What she failed to disclose,” according to RI Right to Life executive director Barth E. Bracy, “is that while both the federal and state bans on partial birth abortion already contain exceptions to prevent the death of the mother, neither contain the ‘health exception’ Raimondo is now cunningly demanding, precisely because it would make any ban on partial birth abortion virtually meaningless.”

Bracy explains that, “In the 1973 Doe v Bolton case, the Supreme Court defined health as including ‘all factors-physical, emotional, psychological, familial, and the woman’s age-relevant to the well-being of the patient.’ Raimondo and Planned Parenthood are well aware that their ‘health exception’ is a loophole big enough through which to drive Rhode Island’s entire fleet of school busses filled with unborn babies already past the age of viability.”

“This is a well-known, settled matter,” continues Bracy. “After hearing extensive medical testimony, the U.S. Congress found that partial birth abortion is ‘a gruesome and inhumane procedure that is never medically necessary,’ and passed a ban containing no ‘health exception.’ And the Supreme Court upheld that law in 2007.”

“It is goofy for Raimondo to claim,” Bracy concludes, “that she would support a ban on late-term abortions while trying to thwart an enforceable state ban on the most barbaric form thereof. And it is the epitome of shamelessness for Raimondo to mislead the people of Rhode Island about her defense of a depraved practice bordering on infanticide.”

The Rhode Island State Right to Life Committee calls again upon Treasurer Gina Raimondo to repudiate the pledges she has made to secure the financial backing of the abortion industry, and to stop trying to mislead the people of Rhode Island about her extreme position on abortion.