Rams WR Brandin Cooks: ‘Jesus is the light of the world’ 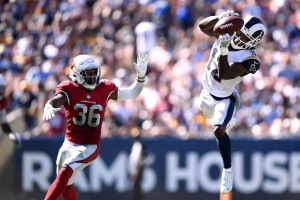 (Sports Spectrum) If anyone in the NFL has modeled consistency in 2018, it’s been the Los Angeles Rams.

The league’s last remaining undefeated team after six games, the West Coast’s hottest NFC West contender has taken the game by storm with a modern rendition of “The Greatest Show on Turf” — a showcase not only of electric dominance but of enviable steadiness.

A year after going 11-5 and earning Coach of the Year honors in his first year on the job, head coach Sean McVay is unleashing creativity with quarterback Jared Goff, another big name who’s proving that 2017 wasn’t a fluke. The former No. 1 overall draft pick is a legitimate MVP candidate after a 6-0 start, thanks to a top-five passing yardage total (1,928), 110.9 passer rating and career-best accuracy.

Elsewhere on the Rams’ restocked roster, Goff and McVay have been aided by reigning Offensive Player of the Year Todd Gurley, who’s fresh off a 208-yard rushing performance and well on pace to eclipse his personal-best marks (1,308 yards, 13 TD) from a year ago; a Wade Phillips-led defense ranked seventh in the NFL in points allowed per game; and elite complements like Cooper Kupp and Robert Woods, who’ve powered an offense ranked No. 1 in the league and top five in almost every major category.

Brandin Cooks is not to be overlooked amid the Rams’ ensemble cast. In fact, the former New Orleans Saints and New England Patriots wide receiver might be the best deep threat in the game when he’s on the field. Woods leads Los Angeles in receptions, and Kupp leads the team in touchdown catches, but no one is stretching the field with as much regularity as Cooks, the fifth-year, 5-foot-10 speedster.

Of all wideouts with at least 20 catches in 2018, Cooks ranks behind only DeSean Jackson and John Brown in yards per catch with an average of 18 yards per reception. And despite battling a recent concussion, he’s got more total yards than both Jackson and Brown. In fact, only eight receivers in the NFL have more yards than Cooks, whose 505 through six games put him on track for a fourth straight 1,000-yard campaign. Those eight: Robert Woods, Adam Thielen, Julio Jones, DeAndre Hopkins, Tyreek Hill, JuJu Smith-Schuster, Michael Thomas and Odell Beckham Jr.

In other words, on a team full of superstars, Cooks is as productive and consistent as any of them.

Off the field, the former first-round draft pick has been just as persistent in his declaration of faith. A devout Christian who’s credited God for his gifts and called his relationship with Jesus the most important thing in his life, Cooks has rarely gone a day during the Rams’ hot start without sharing Biblical wisdom.

In the last week alone, Cooks has encouraged his 115,000 Twitter followers to “follow in Christ steps,” said that the “name of the Lord is a fortified tower” and recited Jeremiah 29:13: “You will seek Me and find Me, when you seek Me with all your heart.”