Rand Paul: Republicans, Democrats ‘Joining Hands Together to Blow a Hole in the Debt’ 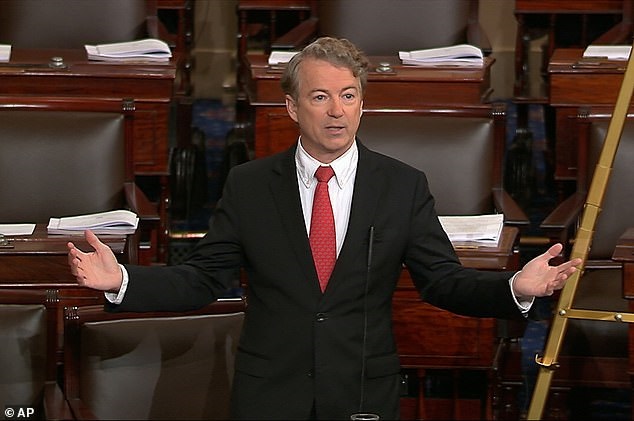 In this image from video from Senate Television, Sen. Rand Paul, R-Ky., speaks on the floor of the Senate Thursday, Feb. 8, 2018, on Capitol Hill in Washington. (Senate TV via AP)

(CNSNews.com) – Some conservative Republicans, including Sen. Rand Paul (R-Ky.), voted against the massive $1.3 trillion spending bill produced by Republicans and cheered by Democrats. But enough Senate Democrats and Republicans joined together to pass the bill early Friday morning.

Paul said Democrats and Republicans have forged what he called an “unholy alliance.”

“Republicans are not fiscally conservative on the military. They want unlimited spending on the military. Democrats say, we’ll give it to you. We’re not really opposed to it. We’ll give you the military spending if you give us the domestic spending. So really, the unholy alliance, the unholy compromise has been going on for decades is, we really have actually too much compromise in Washington. They’re always compromising to raise spending and increase the debt.”

Paul said Republicans should stand for balanced budgets, limited spending, less debt — and reading the bills: “You know, I’m kind of old school,” Paul said. “I think you ought to read the bills before you vote on them. This was a 2,200-page bill we got it last night at midnight. I have been working all day diligently through the bill and I’m up to page 600. But you know, I’ve still got quite a bit of ways to go to read the bill.”

None of the lawmakers who voted for the bill or against it had time to read all the way through it. In the end, the bill that funds the government through Sept. 30 passed 65-32 in the Senate (23 Republicans, 8 Democrats and 1 independent voted no.) The bill passed 256-167 in the House. President Trump is expected to sign it.