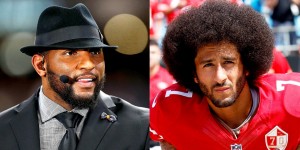 Retired NFL star Ray Lewis is revealing that he consistently prays for free agent quarterback Colin Kaepernick whose name happens to be in his Bible.

Lewis, the 42-year-old former linebacker who spent 17 years with the Baltimore Ravens, revealed his prayers for Kaepernick who has had trouble finding a home in the NFL since he began protesting police brutality last year and vowing to donate $1 million to oppressed communities.

“While a bunch of people are talking about this man, Kaep let me tell you something brother. I pray for you more than you ever can imagine,” Lewis said in a video posted on Twitter Tuesday. “Your name is in my Bible that God gives you the vision ..I applaud you for the things that you stood up for.”

Lewis’ comments come after he appeared on Fox Sports 1’s “Undisputed” Monday to reveal that Ravens owner Steve Bisciotti consulted with him about bringing Kaepernick to the team. While on the show, he debated with co-host Shannon Sharpe who was once a tight end for the Ravens.

While Lewis said he was against injustices in the black community, he was vocal about not agreeing with the way Kaepernick decided to kneel instead of stand during the national anthem as a form of protest. More important than his protesting, Lewis said he wanted to know if Kaepernick could help his team win games.

Lewis received a great deal of backlash on social media for his comments, and admitted that people were contacting him after the “Undisputed” segment.

In his Twitter video, Lewis spoke directly to Kaepernick to let him know that he supported the quarterback who has yet to be picked up after opting out of his contract with the San Francisco 49ers last March.

“I wish you the best in life. I hope you chase whatever God got for you to chase,” Lewis said. “And once again I applaud what you stood up for because I’m in the streets every day. So while people are talking about what’s this and why Ray said this ..Ray ain’t said nothing.”

He went on to add, “If people really want to help you they’ll pray for you brother.”

Lewis referred to the football field as a sanctuary, urging Kaepernick to keep up his NFL pursuits.

“The football field is our sanctuary. If you do nothing else young man get back on the football field and your play speak for yourself,” Lewis said. “And what you do off the field don’t let too many people know because they’re going to judge you anyway no matter what you do. No matter if it’s good or bad.”