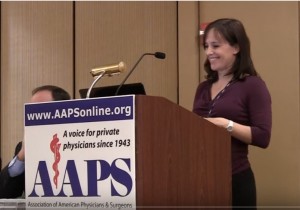 Even before Obamacare was brought to the table — which made medical coverage more complicated for most consumers and medical providers — an attempt was made to take back real doctoring by eliminating complicated billing and insurance code allowances and replacing them with cash only payments for various treatments.

Starting in 1995, a few Seattle, Washington M.D.s established a practice of concierge medicine where clients would pay a monthly, quarterly, or annual out-of-pocket cash fee, similar to attorney retainers, for almost unlimited service attention and service.

Although the original fees were set at $1,000 per month, as the practice spread and became more varied, fees ranged from $1,200 to $3000 annually for many, as low as $80 to $100 per month. The original concierge model was somewhat elitist with its pricing.

Now there are several types of primary care options among the cash only medical providers that exist in the minority, scattered throughout the nation. They have to restrict their patient lists to somewhere in the mid-hundreds to provide the personal care desired. Insurance based plans may have well over a  thousand patients to one doctor: in and out medical care.

What Motivated These Doctors to Take Out the Financial Middlemen?

The original intent was to avoid the red tape of conflicting government and private medical insurance requirements and payout restrictions that had the potential of causing both physicians and patients to become stressed out and not completely doctored.

Some doctors complained of too many red tape knots and jumbles, which blocked a straight forward doctor-client relationship of substance. Instead of five minutes and a referral to a specialist, doctors could spend more time with their retainer payment clients, and those clients had better and quicker access to their doctors.

These doctors discovered that having less staff to handle insurance payouts had a direct impact on lowering their costs because of lowered overhead. It takes a whole staff and some pricey computer programs to track and maintain the complexity of what medical cost provider each patient is involved in and what can be covered. Or billing may have to be outsourced and that’s another cost.

Sometimes a patient thinks he or she is covered completely for a treatment but isn’t. Additional services are sometimes excluded. Most plans are complex. Even the more simple plans for lower income people, like Medicaid, have loopholes that leave both doctors without payments and patients with bill collectors.

The complexity among different private insurances, medical networks, and government medical insurance plans regarding what is covered and what won’t be covered also limits a doctor’s decision making on what he or she can do for a patient without retribution even if they make an honest code mistake to help their client or patient.

When it comes to tracking costs, government insurers such as Medicare and Medicaid have several restrictions and codes that describe allowable treatments for payment. If deviated from, they are sometimes investigated and prosecuted. Sometimes necessarily so, sometimes absurdly so.

One example occurred when a close friend needed cataracts removed. His night driving was atrocious, and all the natural remedies he tried had failed. So he finally realized that he should go under the knife to save his vision. He was in a bad spot financially but had managed Medicare parts A and B coverage which would cover all but 20 percent of the total surgical cost.

So he made a candid plea of having the eye doctor not charge him for the difference not covered by Medicare A and B. The ophthalmologist’s response was fascinating and heartwarming. He said if he didn’t charge the whole amount, the government could absurdly charge him with fraud. So he had to charge him completely. But he promised that he wouldn’t put the billing for that difference into collections. And he did not.

This is an example of a doctor who responds to a client’s needs despite bureaucratic insurance restrictions. But with direct payment cash-based M.D.s, those restrictions are not there. They can treat patients according to their needs and become more familiar with them.

The cash only primary practice has also graduated to including surgical events. Time Magazine recently covered Oklahoma’s Surgical Center, which was created by anesthesiologists Steven Lantier and Keith Smith. The Surgical Center had created their cash-based medical center in Oklahoma City, and they post their prices online.

Their prices are all inclusive. They are not broken into several components with the uncertainty of what’s covered and what’s not because they take cash payments. Their fees are usually lower and without strings attached. They include airfare and treating complications or extended post-surgical treatments such as physical therapy.

The personal example storied in the Time piece focused on someone who needed a knee replacement. The Surgical Center in Oklahoma offered a Montana resident the surgery with all accompanying medical services and airfare to and from the city for $19,000, around half of what his local hospital offered without including other costs which did not include the usually billed separately anesthesiologist.

In this particular person’s case, he was a high management level person in a company that used its own funds for covering employees’ medical costs. It was a no-brainer for them to simply pay up front at a much lower price and have it all done under one roof.

After the surgery, this patient was treated with physical therapy, nurse visits, and pain medications while he stayed in his hotel room for 10 days. He thought it was the best attention and medical care he had received in his 68 years.

Even more striking, the Time Magazine coverage disclosed how this is trending among other group plans:

The Oklahoma state public employees’ insurance fund, which covers 183,000 people, recently did similar math. In 2015 it announced a new rule: If patients go to a traditional hospital, they pay their deductible and co-payment. If they go to a cash-based provider that meets the fund’s criteria, including the Surgery Center of Oklahoma, they pay nothing at all.

The Oklahoma Surgical Center saw its business take off after the Patient Protection and Affordable Care Act aka Obamacare had arrived in 2008. Obamacare caused a great deal of confusion in the private insurance industry and raised many consumers’ out of pocket expenses.

The Surgical Center founders found it ironic that Obamacare wound up ramping up their surgical business. There are several other similar centers scattered around the country who are also thriving.

People with high-deductible catastrophic plans, where sometimes coverage doesn’t kick in until after several thousand dollars, can take advantage of much lower cash pricing for services like basic MRIs performed by cash-based imaging facilities at $500 or less.

Although the much lower cash payment would not reduce their deductible, it would be costlier if they went the normal route by perhaps a few thousand dollars.

Finding These Cash Based Medical Services

Concierge services are usually for the high-end folks who want better medical service and attention. But several lower income brackets are covered by other cash-based primary care physicians who don’t come running to you when you go to the E.R. or let you have their cell phone numbers. But even some of the lowest charging direct primary cash-based services will make house calls. Remember those?

For some who frequent doctor’s offices, the monthly payments for retaining their services makes sense. It’s an open door for longer visits, shorter waits, and less schedule or payment confusions. However, those who use direct pay primary care services are urged to carry a high deductible catastrophic plan for serious events. You may find direct-pay services near you here and/or here.