Red Heifer Discovered! – Major Obstacle To The Rebuilding Of The Jewish Temple Removed 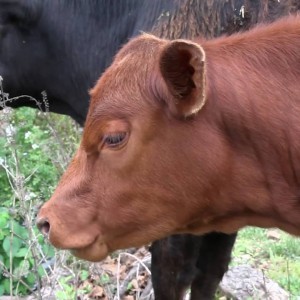 (The American Dream) – Up until now, one of the major barriers to the rebuilding of the Jewish Temple in Jerusalem has been the lack of a red heifer.  A qualified red heifer has not been seen in the land of Israel for nearly two thousand years, and without one it would not be possible to resume Temple worship.  But now a candidate has been found that could change everything.  The Temple Institute in Jerusalem has released stunning video footage of a red heifer that they believe meets the Biblical requirements.  This red heifer was born in the United States, and the owners of the red heifer contacted the Temple Institute in order to receive instructions about how to care for it.  It is hoped that this red heifer will eventually be transported to the land of Israel and be used for the purification of the priests and the vessels that will be used in a rebuilt Jewish Temple.

This is a very big deal, because without a red heifer the Temple would never be rebuilt.  So needless to say, the video footage that you are about to see is creating quite a stir in Jewish communities throughout the world.  The Temple Institute contacted a documentary filmmaker to film this red heifer, and the video was just released to the public earlier this month on YouTube.

If you are not familiar with the Temple Institute, it is an organization located in the heart of Jerusalem that is dedicated to making preparations for the rebuilding of the Jewish Temple.  The Institute has created a whole host of items that are intended to be used in a future Temple including priestly garments made to Biblical specifications, a seven-branched Menorah made of pure gold, a golden Incense Altar and a golden Table of Showbread.  The following is what the Temple Institute has to say about itself…

The Temple Institute (in Hebrew, Machon HaMikdash), founded in 1987, is a non-profit educational and religious organization located in the Jewish quarter of Jerusalem’s Old City. The Institute is dedicated to every aspect of the Biblical commandment to build the Holy Temple of G-d on Mount Moriah in Jerusalem. Our short-term goal is to rekindle the flame of the Holy Temple in the hearts of mankind through education. Our long-term goal is to do all in our limited power to bring about the building of the Holy Temple in our time. Thus, the Institute’s efforts include raising public awareness about the Holy Temple, and the central role that it occupies in the spiritual life of mankind. The many areas of activities conducted by the Institute combine research, seminars, publications, and conferences, as well as the production of educational materials.

The major focus of the Institute is its efforts towards the beginning of the actual rebuilding of the Holy Temple. Towards this end, the Institute has begun to restore and construct the sacred vessels for the service of the Holy Temple. These vessels, which G-d commanded Israel to create, can be seen today at our exhibition in Jerusalem’s Old City Jewish Quarter. They are made according to the exact specifications of the Bible, and have been constructed from the original source materials, such as gold, copper, silver and wood. These are authentic, accurate vessels, not merely replicas or models. All of these items are fit and ready for use in the service of the Holy Temple. Among the many items featured in the exhibition are musical instruments played by the Levitical choir, the golden crown of the High Priest, and gold and silver vessels used in the incense and sacrificial services. After many years of effort and toil, the Institute has completed the three most important and central vessels of the Divine service: the seven-branched candelabra, or Menorah, made of pure gold; the golden Incense Altar, and the golden Table of the Showbread.

But without the ashes of a red heifer, all of those preparations are in vain. Before the Temple can be rebuilt and Temple worship can be resumed, a perfect red heifer must be found. And now one has been discovered.

According to Orthodox Jewish authorities, a suitable red heifer cannot even have a single black hair.  So finding such a creature is not easy.  According to Jewish tradition, only nine such red heifers were found during the entire time when the first two temples were standing.  And if this current red heifer ever does any work or ever mates it will be disqualified.  The following comes from a Jewish source… www.chabad.org

The sages infer that the Red Heifer must be completely red—even two black hairs would render it invalid. And it must not have done any work in its lifetime—even having a yoke placed on its back or having mated would disqualify it.

Once a candidate was found, and there was need for more purifying ash water, the cow would be slaughtered and burned on a pyre, along with a cedar branch, hyssop sprig, and crimson wool. The ceremony took place on the Mount of Olives, opposite the Temple Mount.

All of this has huge implications for world events. Traditionally, many Orthodox Jews have believed that the spotting of a red heifer would herald the coming of the Messiah. And if this red heifer does indeed turn out to be a suitable candidate, one of the biggest obstacles to rebuilding the Jewish Temple in Jerusalem will have been removed.

For Christians, this is an extremely exciting development as well. The Bible tells us that there will be a Temple standing in Jerusalem in the last days, and that the Antichrist will defile it. But that Bible prophecy could never be fulfilled until a red heifer was found.

Yes, there are still many more obstacles standing in the way of the Jewish people rebuilding the Temple.  For one, the Islamic world would go into convulsions if Israel tried to build anything on or near the Temple mount at this point.

However, the Temple Institute and a whole host of Orthodox Jews are absolutely determined to make the rebuilding of the Temple a reality, and now they appear to be one giant step closer to achieving that dream.